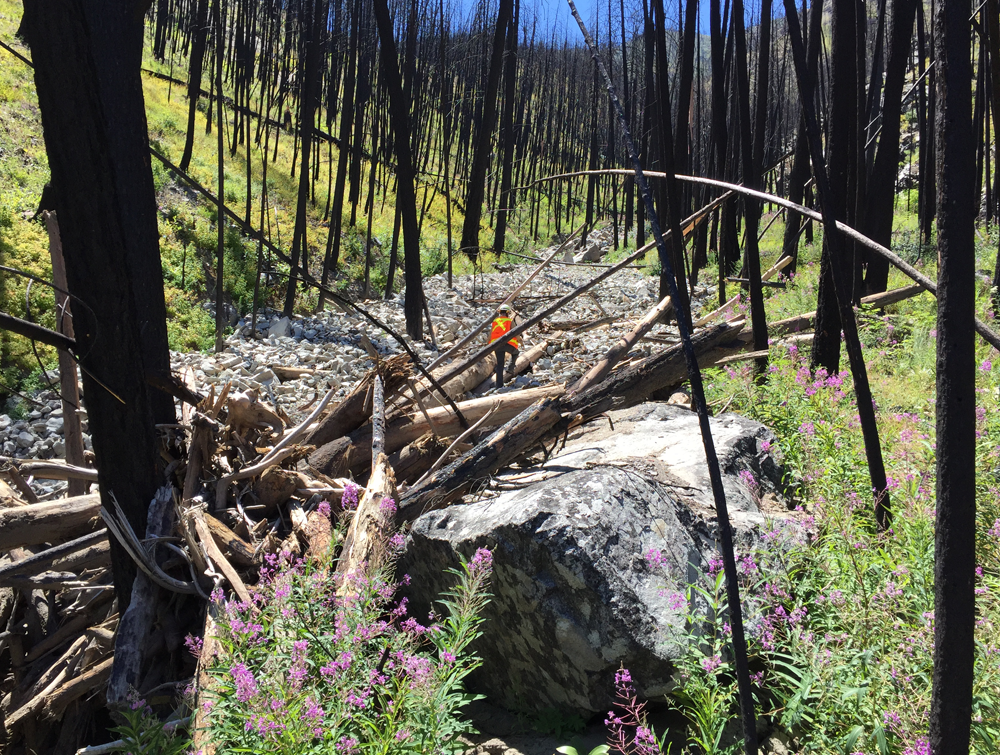 Washingtonians who live on or below hillsides—especially in areas impacted by recent wildfires—should be aware that the rainy season and summer storms increase the chances of potentially dangerous debris flows. The Washington Geological Survey’s Wildfire-Associated Landslide Emergency Response Team (WALERT) conducts rapid debris flow hazard assessments in areas recently burned by wildfires. Click on the Reports icon below to see the available WALERT assessment reports.

What is a debris flow

A debris flow is a fast-moving mass of material—a slurry of water, rock, soil, vegetation, and even boulders and trees—that moves downhill by sliding, flowing and (or) falling. People who witness debris flows often compare the sound to a fast-moving freight train.

A wildfire-associated debris flow rushes down a hillslope, carrying soil, rocks, and vegetation.

Debris flows range from a few square yards to hundreds of acres in area, and from a few inches to 50 feet thick. Even smaller debris flows can be locally dangerous—imagine trying to walk through a three-inch deep mass of wet concrete moving at 30 mph.

What is the difference between a mudslide and a debris flow?

Debris flows are often incorrectly identified as mudflows or mudslides in the news. A debris flow is far more powerful and dangerous than a mudslide or mudflow. It can move faster and farther, and is strong enough to carry enormous boulders and entire trees, not to mention cars, concrete Jersey barriers, and sandbags. 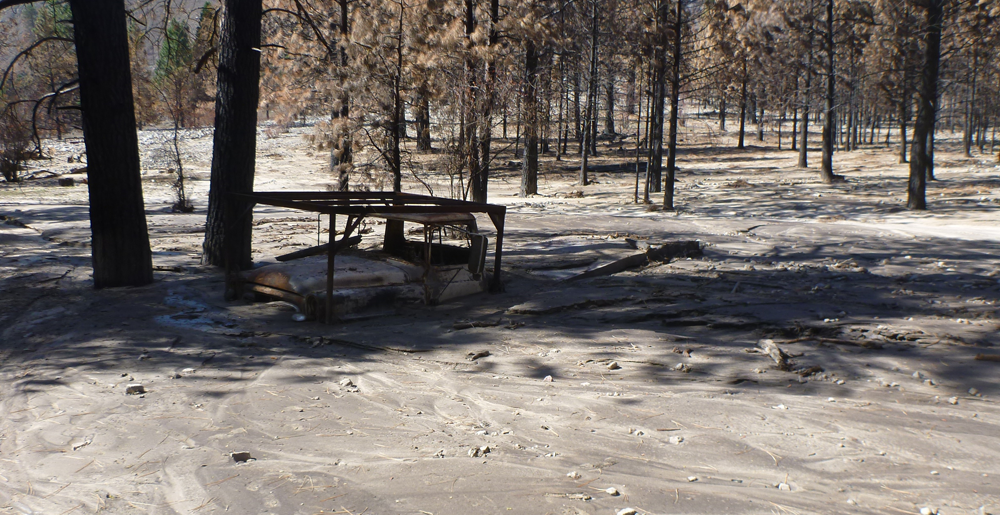 An abandoned truck burned during the 2014 Carlton Complex fire and later buried in debris from flash flooding and debris flows that occurred during the wildfire.

What is the difference between a large, slow-moving landslide and a debris flow?

Large, slow-moving landslides composed of rock and soil can cause extensive property damage but usually do not result in loss of life. Those impacted by a slow-moving landslide may have hours to months of warning. This is because it takes weeks, months, or years of water percolating through soil for there to be detectible landslide movement.

This is opposed to fast-moving landslides, such as debris flows, which are typically triggered by short, intense periods of rainfall. These landslides provide little or no warning and are more dangerous because of their speed. They can cause both property damage and loss of life.

Areas impacted by wildfires are particularly prone to debris flows. The burning of vegetation (trees, shrubs, and ground cover) and forest floor duff can produce water-repellant soils, known as hydrophobic soil conditions. The formation of water repellant soils more than doubles the rate that water will flow into watercourses. Burned areas are also more prone to soil erosion due to this loss of the natural cover. The downhill flow of water can erode rills and gullies into a slope, and the lack of vegetation means raindrops can hit the soil directly, increasing their erosive power. 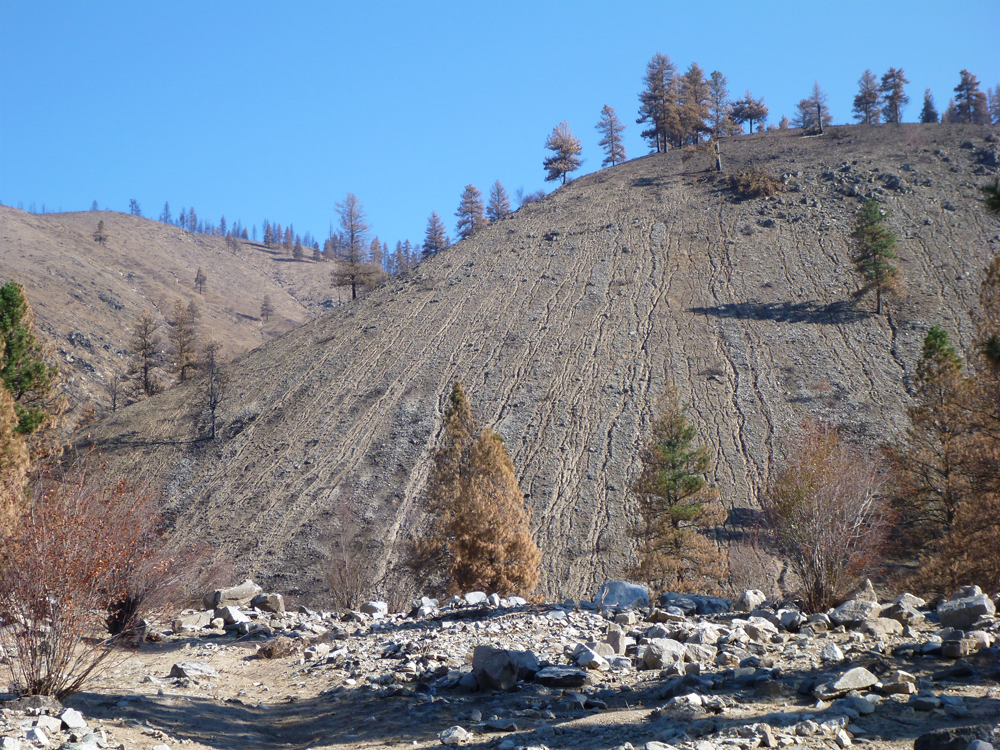 Rills and gullies eroded into a bare hillside by runoff from rainfall.

The increased post-wildfire runoff can cause flash floods, which can turn into debris flows. A flash flood is a rapid increase in flow along a stream channel that may allow the water to overflow channel banks and cause a flood. Typically there is very little time between the storm event upstream and the arrival of the flood downstream, often under an hour. If this flood contains rocks, trees, and other debris, it is termed a debris flow.

Wildfires increase the chances of potentially dangerous debris flows. Note that your area may still be at risk even if the immediate area has not been burned. A burned area far up on a hillside could trigger debris flows that would flow downhill into the valley below. 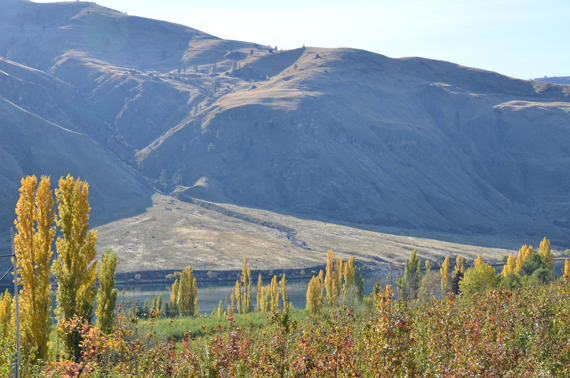 Alluvial fans are broad, fan-shaped deposits that form where streams flow out onto flat valleys. Photo by Jeff Coe of the U.S. Geological Survey.

Alluvial fans are attractive places to build homes and other structures because they are raised above nearby river floodplains, providing panoramic views. However, alluvial fans are active depositional areas that evolve over time. Though fans may be dry most of the year, they may quickly become flooded during rain storms following a wildfire.

What you should know and what you can do

There are several important things to know about debris flows:

What you can do

First and foremost, it is critical that residents heed evacuation warnings from local officials. Debris flows can destroy everything in their path. They can destroy homes and kill people. The only way to stay safe is to not be in their path. In the absence of an official notice, residents should pay attention to evolving conditions around their homes, especially if the area has been affected by wildfires. Here are some of the things you can do to be prepared for a debris flow: 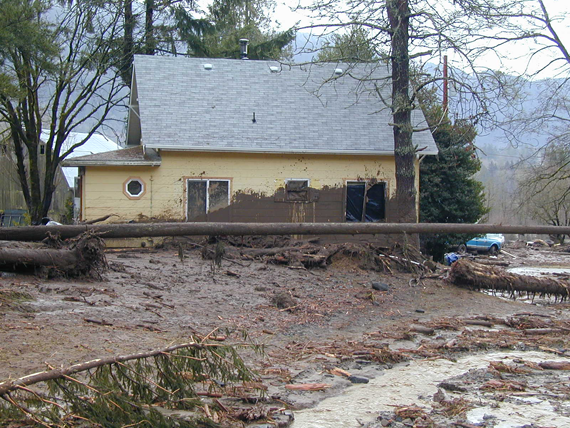 Debris flows and floods can surge high up onto the sides of houses, potentially burying lower-floor bedrooms. 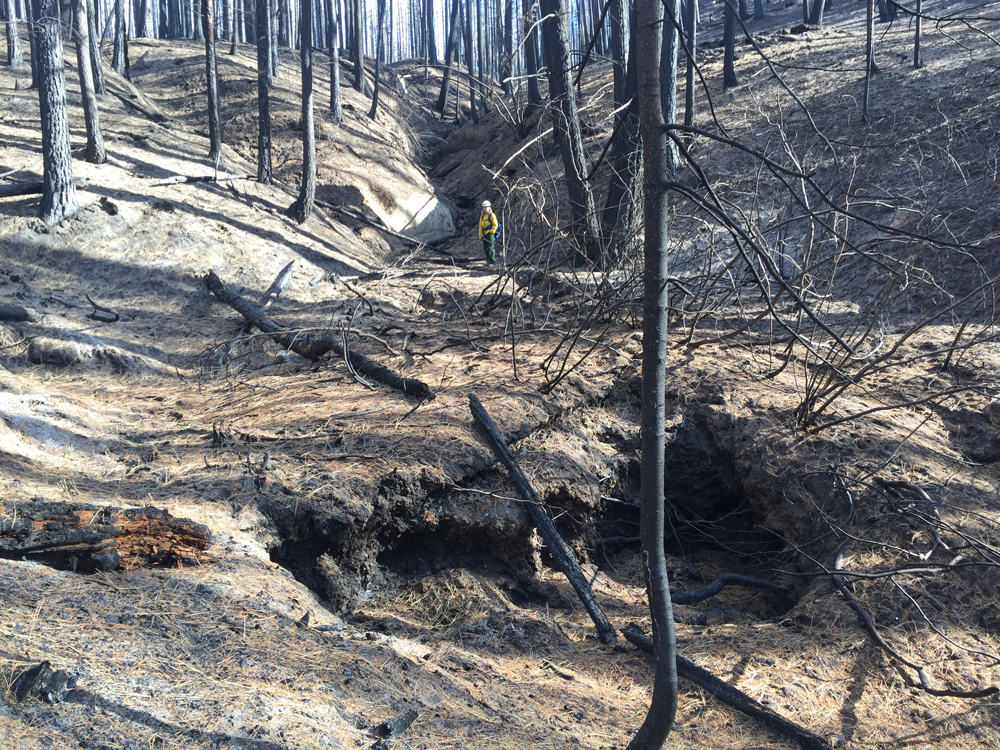 Our geologists use a number of tools to assess the potential for debris flows on recently burned areas. We use information about geology, soils, climate, and topography. We also use aerial imagery, satellite data, and hydrologic and debris flow models developed by agencies such as the U.S. Geological Survey. This information is coupled with aerial reconnaissance and on-the-ground observations of site-specific conditions to develop an understanding of vulnerable areas and risks.

Based upon this information, our geologists develop summary reports noting the areas where property and lives may be at risk of geologic hazards such as debris flows. This information is transferred to the appropriate agencies to inform emergency response plans and mitigation measures. These reports can be downloaded on the Reports page after a post-wildfire assessment has been completed.

Following a wildfire, a team of WGS geologists is deployed to the area to assess the potential for debris flows. Click the following links to download the assessment reports for each fire.

WALERT Team Lead
Kate Mickelson
Landslide Hazards Manager
360-902-1488
kate.mickelson@dnr.wa.gov
If you are impacted by or suspect an active landslide, contact your county emergency manager or your local fire, police, or public works department.
ALLUVIAL FAN FLYER
Read more about how you could be affected by floods and debris flows if you live on an alluvial fan. 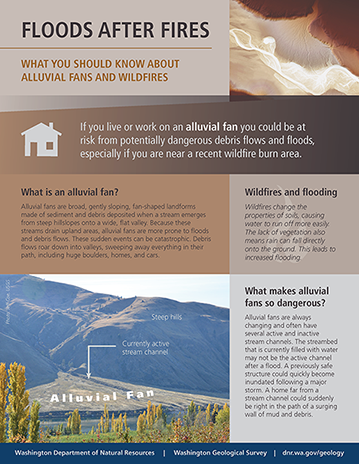 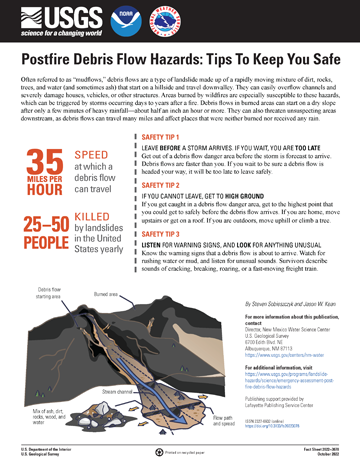