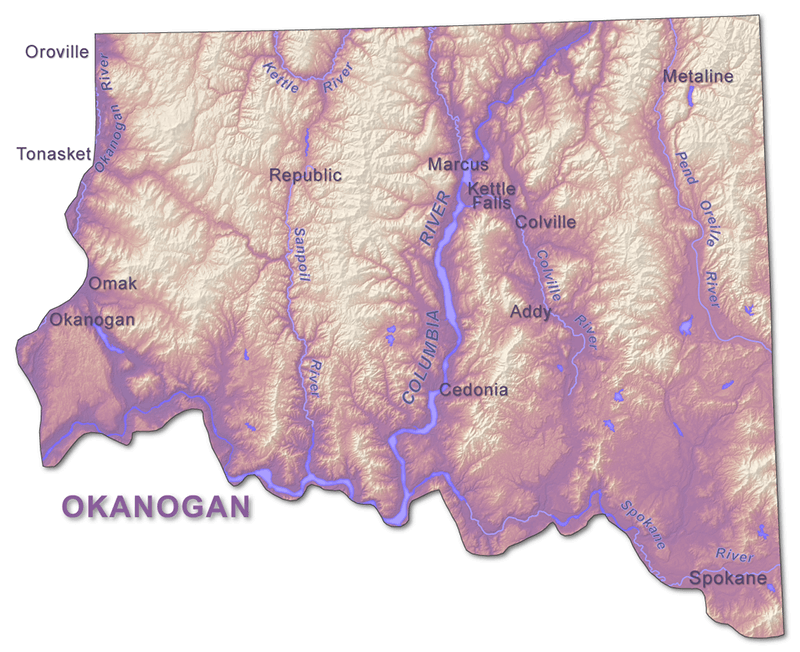 The Okanogan Highlands are located in the northeast corner of Washington, bounded to the north by British Columbia and to the east by Idaho. The province is delineated by the Okanogan and Spokane Rivers and is divided into east and west sections by the Columbia River. This geologic province is categorized by rounded mountains with elevations up to 8,000 feet and deep, narrow valleys. 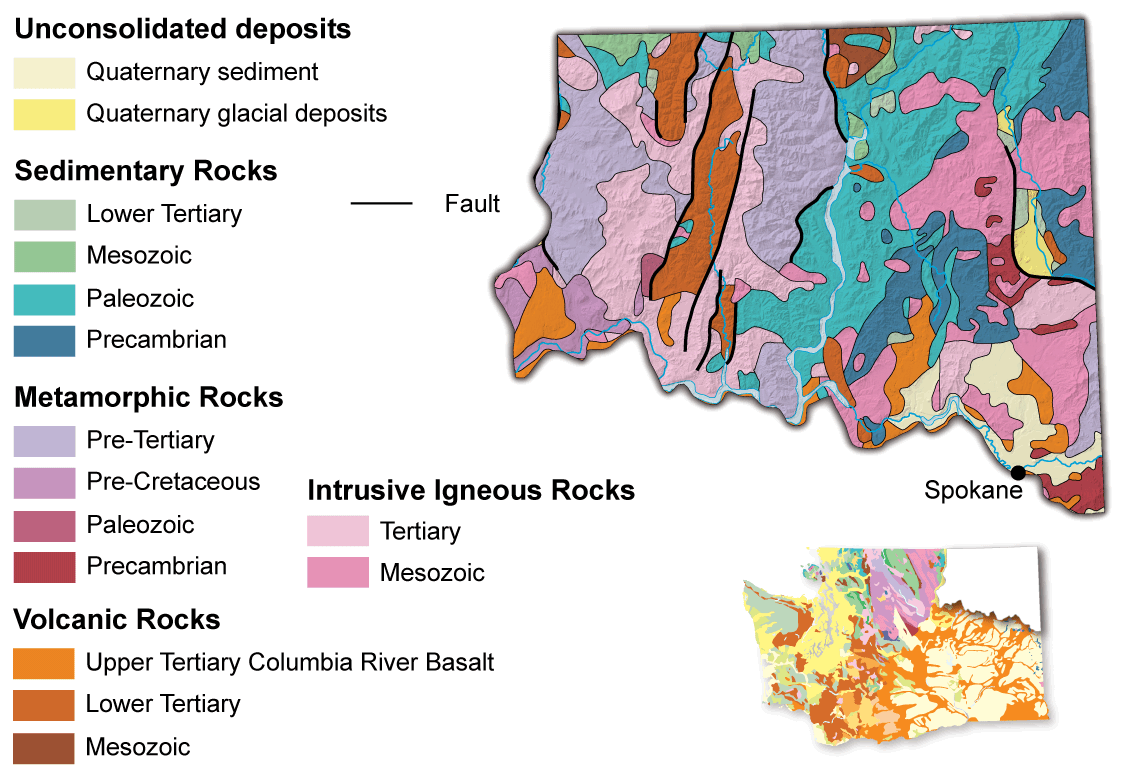 Many complex geological processes formed this region. Some of the oldest rocks in the state from the original North American continent were deformed and metamorphosed when island arcs were accreted onto the continent during the Jurassic. Subsequent faulting during the Eocene formed metamorphic core complexes and extensional basins. Bedrock in this area was covered by ice during the latest ice age. The intensely deformed bedrock has also been a prolific source for economic mineral production.

The oldest rocks in Washington can be traced back to the supercontinent of Rodinia, which is thought to have formed 1.1 billion years ago. About 750 million years ago (Neoproterozoic Era), Rodinia broke apart and the area just west of Spokane became the shoreline for the continent of Laurentia. The rocks in the eastern portion of the Okanogan Highlands are of Precambrian age (540 million years old and older) and consist mainly of metasedimentary rocks, formed when sedimentary rocks are later subjected to heat and pressure. The most notable rocks formed both before and during this time are the Belt Supergroup, Windermere, and Deer Trail Groups; they extend from British Columbia south to the Columbia River.

This new coast transitioned into an active subduction zone (a subduction zone is a plate boundary where one plate is sinking underneath the other, usually with an ocean plate being crushed beneath continental crust). The Laurentia subduction zone existed from about 350 to 170 million years ago. The Kootenay terrane formed during that time period, which consists of rocks like fossiliferous carbonates, sandstones, and shales that were deposited in the shallow sea near the continent. The Kootenay Arc extends northeastward for 150 miles into British Columbia.

During the Jurassic Period, approximately 175 million years ago, huge amounts of crust composed of micro continents and island arcs within the Intermontane superterrane were accreted to the North American continent. Everything west of the Precambrian rocks in northeastern Washington was created either through complex processes along an active subduction zone or transported from elsewhere and stuck onto the continent. This activity resulted in an arcuate belt of thrust faulting, terrane stacking, metamorphism, and plutonism from British Columbia southward to Arizona. 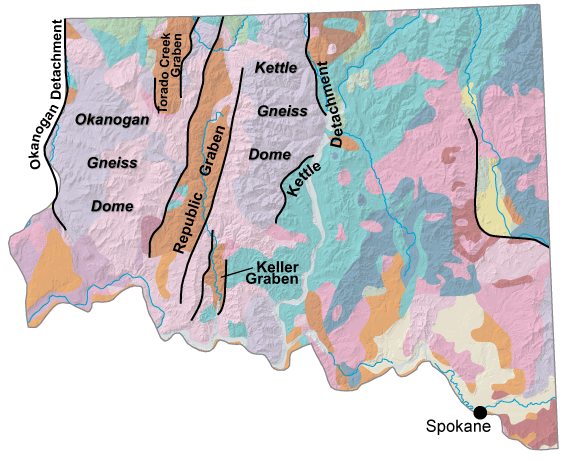 The Eocene Epoch had a profound effect on the geology of the Okanogan Highlands. Collapse of the orogenic belt that was created in the Jurassic formed large extensional features such as grabens and metamorphic core complexes. A graben is a basin formed between extensional faults. Examples in this region included the Republic, Keller, and Torada Creek grabens. Metamorphic core complexes are pieces of deeper crust that are brought to the surface by low-angle extensional faults, called detachment faults. The Okanogan and Kettle detachments are up to 100 kilometers long. Highly deformed metamorphic rocks, migmatites, and plutons were uplifted along these faults. Eventually, the rocks were exposed at the surface, forming the Okanogan and Kettle gneiss domes.

Diagrammatic cross section across the Okanogan and Kettle gneiss domes, which were exhumed and cooled in early Eocene time in response to extension deep in the Earth's crust. Modified from Kruckenberg and others (2008).

The Okanogan Highlands were covered by great ice sheets during the Pleistocene Epoch. As the ice sheets retreated to the north, lakes formed in the valleys of the Columbia and Pend Oreille Rivers. Along the Canadian boundary, terrace deposits indicate lake levels 2,000 feet above current sea level. Meltwater filled these lakes with sand, silt, and clay.

Glacial Lake Missoula, formed from ice damming of the Clark River in western Montana, repeatedly released massive amounts of water down the Spokane Valley when the ice dam failed, depositing thick sequences of gravel, cobbles, and boulders in their wake. 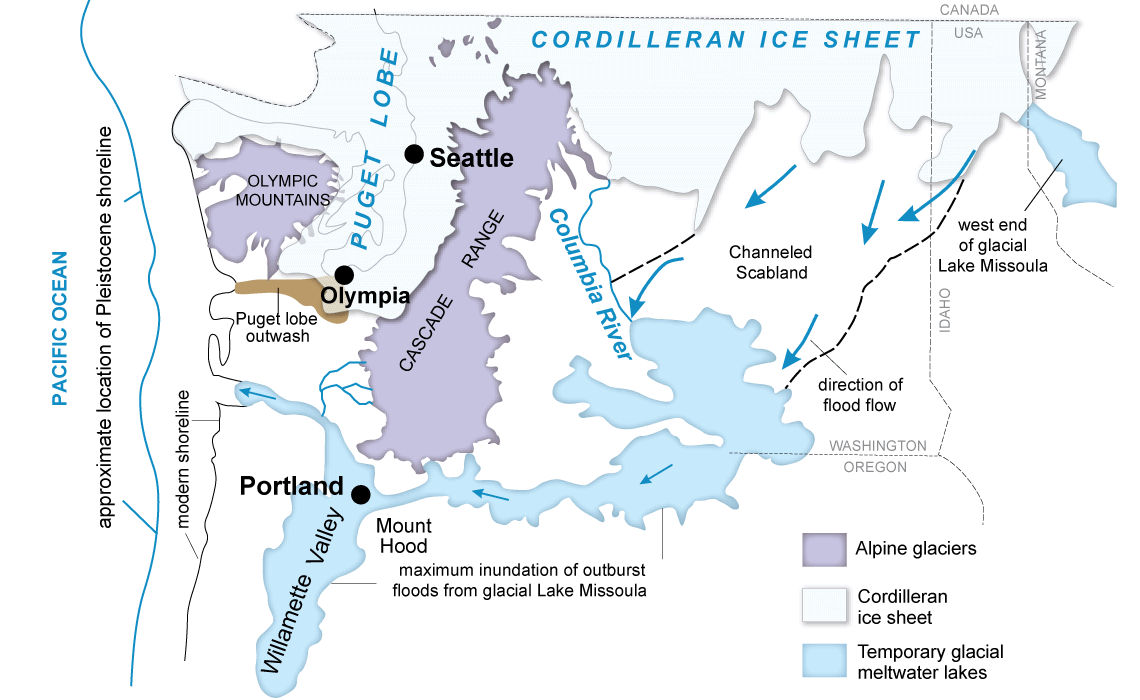 The Stonerose interpretive center, in downtown Republic, welcomes the public to come and collect some of these fossils. It is possible to find leaves, flowers, insects, and fish in the shale of the dig site.

The Rathdrum-Spokane Aquifer is the sole water source for the majority of people in the area, serving more than 500,000 people every day. It extends across over 370 square miles of Washington and Idaho. The aquifer is composed of sand and gravel left behind by the massive ice-age floods that traversed the valley during the late stages of the last glaciation. Water drains from nearby mountains into these porous deposits creating a massive aquifer. Water flow within these deposits is notable—close to one billion gallons of water flow in and out of the aquifer every day!

The western Okanogan Highlands has historically been a significant source of mineral production. While the primary target has been gold, other ore deposits have been mined as well.

Knob Hill Mill, Republic Mining district, circa 1949; one of the largest producing areas of gold and silver in Washington.

The center of gold mining is the Republic District in the Republic graben. By 1989, the district had produced more than 2.5 million ounces of gold and 14 million ounces of silver. Gold mining is winding down at Buckhorn Mine, located in Okanogan County. Permian metasedimentary rocks and Jurassic metavolcanic rocks make up the basis of the deposit. Hot, mineral-rich waters altered these rocks during times of volcanic activity and concentrated gold into economically viable amounts. As the reserves at this site dwindle, exploration is continuing for new reserves in the area.

Gold and silver deposits have been found in the Eocene Sanpoil Volcanics. These deposits are considered to represent fossil hot spring systems related to the final stages of Eocene volcanism. Other significant gold deposits, such as those near Cooke Mountain, were formed by replacement of Permian and Triassic metasedimentary rocks. Associated minerals are magnetite, pyrrhotite, pyrite, and chalcopyrite.

Porphyry copper-molybdenum deposits with chalcopyrite and molybdenite have been outlined by drilling at Oroville and Keller. The Keller Mount Tolman deposit contains the third or fourth largest molybdenum reserve in the United States, with 2.4 billion tons of ore.

Mining also included coal, silver, lead, zinc, and uranium. The area around Spokane is home to two-mica granites, which are rich in uranium. The Midnite Mine on the Spokane Indian Reservation produced uranium ore from 1955 to 1981.