Creosote Piling Removal Program
Read this page
Resume the reading of the page
Pause the reading of the page
Since 2007, the DNR Creosote Removal Program has been leading efforts throughout Puget Sound to reduce the sources of toxic chemicals and restore shorelines in Puget Sound by removing derelict creosote-treated pilings and overwater structures from our marine waters.  The program focuses removal efforts on large collections of creosote-treated pilings and derelict over-water structures such as piers and docks.  Removing the standing piles before they break helps remove the entire source and prevents it from washing up on shorelines and impacting sensitive habitats. 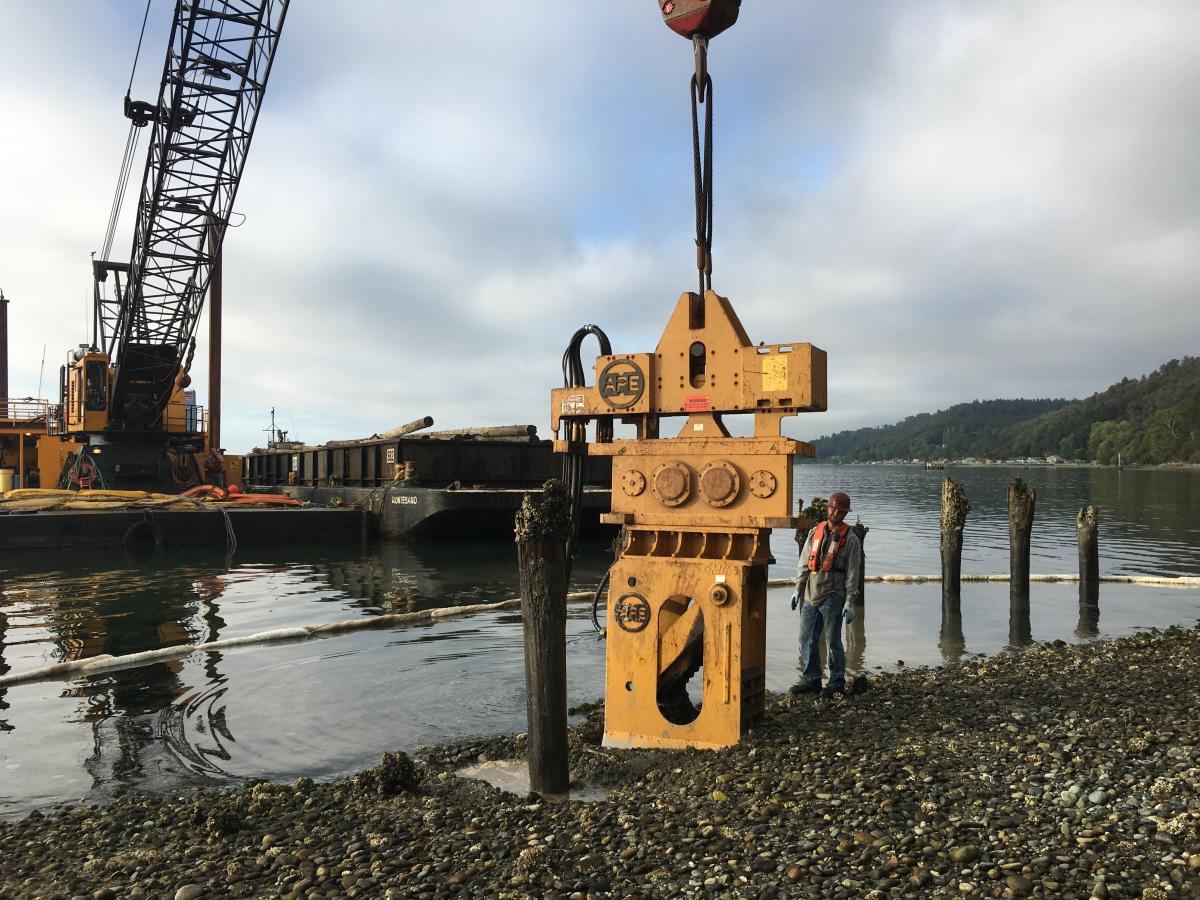 Creosote has been used as a wood preservative for more than a century to help prevent the decay of pilings that support docks and piers in Puget Sound.
Creosote or coal tar are the by-products of the high-temperature treatment of coal to make natural gas and other fuels.  It is a thick, black or dark brown liquid or semisolid with a strong odor.  Approximately 300 chemicals have been identified in coal tar creosote; however, depending on the processing as many as 10,000 other chemicals may be in the mixture.  Polycyclic aromatic hydrocarbons (PAHs) are one of the highest chemicals of concern in creosote.  PAHs are a known carcinogen.

Why is it important to remove creosote-treated wood from Puget Sound?

Creosote-treated pilings may leach chemicals into the sediments and water column throughout their lifetime.  People can be exposed to creosote vapors on a hot day or through direct contact when playing, sitting on, or burning the treated wood.
Creosote causes high mortality and developmental abnormalities in herring eggs.  A study of herring in San Francisco Bay found embryos that spawned onto creosote-treated piles had a one hundred percent mortality rate.  Herring are an important forage fish in Puget Sound and a critical food source for our migrating salmon, which are the sole food source of the Southern Resident Killer Whale.
The DNR Cresosote Removal Program is working to reduce sources of PAHs in Puget Sound by removing structures and debris that are treated with creosote; reducing human exposure to creosote on beaches; and improving the quality of the nearshore habitats for forage fish and other key species.  DNR also promotes the use of non-creosote-treated materials in the building of new strucutres and replacement structures.