About the Aquatic Reserve

Fidalgo Bay, located just east of the City of Anacortes, is part of an ancient delta of the Skagit River. It is characterized by expansive eelgrass beds, tidal flats, salt marshes and pocket estuaries. In 2008, Fidalgo Bay was designated as an aquatic reserve to preserve these essential habitats and the diverse species that use the area. 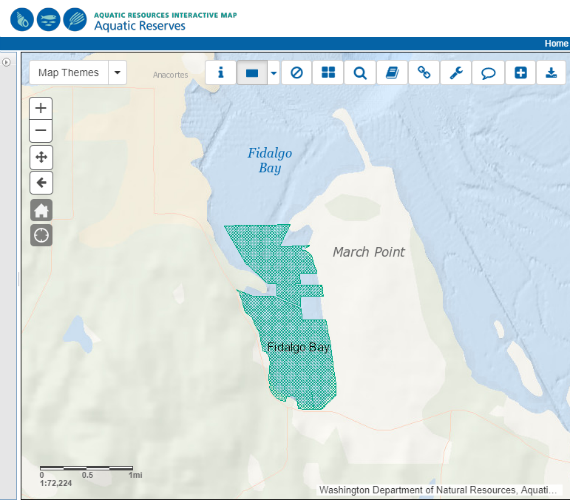 Click here or on the image above to launch the Aquatic Reserves Program Data Viewer. 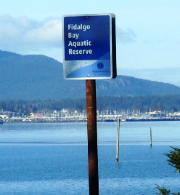 Within Fidalgo Bay Aquatic Reserve you’ll find tidal flats, salt marshes, pocket estuaries, sandy spits and expansive native eelgrass beds— essential habitats for the reproductive, foraging, and rearing success of many fish and bird species.
Water birds use the reserve as an important stopover on their migratory routes. Surf smelt, a forage fish species, spawn on the sand and gravel beaches in the bay, and their eggs are often visible among the pebbles along the shoreline. Fidalgo Bay is also one of 21 areas in Puget Sound where Pacific herring, another forage fish species, are known to spawn on submerged vegetation. In addition, Fidalgo Bay is the location of a multi-partner project to restore native Olympia oyster beds in Puget Sound. 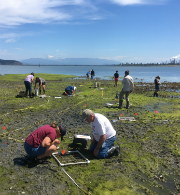 A Citizen Stewardship Committee organizes volunteer surveys of forage fish spawning habitat, intertidal species and marine birds at Fidalgo Bay Aquatic Reserve.
The committee also works to educate others about nearshore ecology, the Aquatic Reserve's condition, and planning issues that affect the reserve. For volunteer opportunities and more information on how to get involved visit the Fidalgo Bay committee.
Citizen Science Reports

In 1999 Skagit Land Trust acquired 450 acres of tidal property in south Fidalgo Bay. The Trust placed a conservation easement on the property, ensuring that it is managed primarily to preserve habitat for fish and wildlife. These tidelands were then gifted to the state for DNR to manage. In 2006 the Trust was able to purchase and donate an additional 82 acres to DNR, also protected through the conservation easement. The aquatic lands donated by the Trust are now managed by DNR as part of the Fidalgo Bay Aquatic Reserve. Skagit Land Trust continues to support the aquatic reserve through the protection and restoration of Fidalgo Bay shoreline and streams that flow into the Bay.

In 2010, the Skagit River System Cooperative, with help from multiple partners, coordinated a restoration project to restore the beach along March’s Point on the east side of Fidalgo Bay. The goal of the project was to replace lost sediments, rebuild the beach slope and improve habitat for forage fish spawning. Learn more about the project here.
Reports and Links​