HomePrograms and ServicesGeologyEnergy, Mining, and Minerals

Much of the higher ground and water temperatures in Washington are the result of magmatic activity associated with the state’s five major stratovolcanoes in the Cascade Range. There is also a large, yet poorly understood area of warm water in the Columbia Basin in eastern Washington.

Many thermal springs are found in high-heat areas. These springs are often aligned with faults. Faults provide pathways for heated fluids to travel from their source to the surface.

It is challenging to find geothermal resources capable of making electricity in Washington State. Most of the heat here is masked by lots of rainfall. These areas are usually also covered by ridiculous amounts of trees. This is not the case in other areas with geothermal potential, like the Basin and Range of Nevada.

We must use things like earthquakes, lidar, geologic mapping, water chemistry, and geophysics to find target areas. In the Cascade Range, there are high elevations, rugged slopes, large amounts of snowfall, and land-use limits in areas of pristine wilderness. These factors make the task even more difficult. 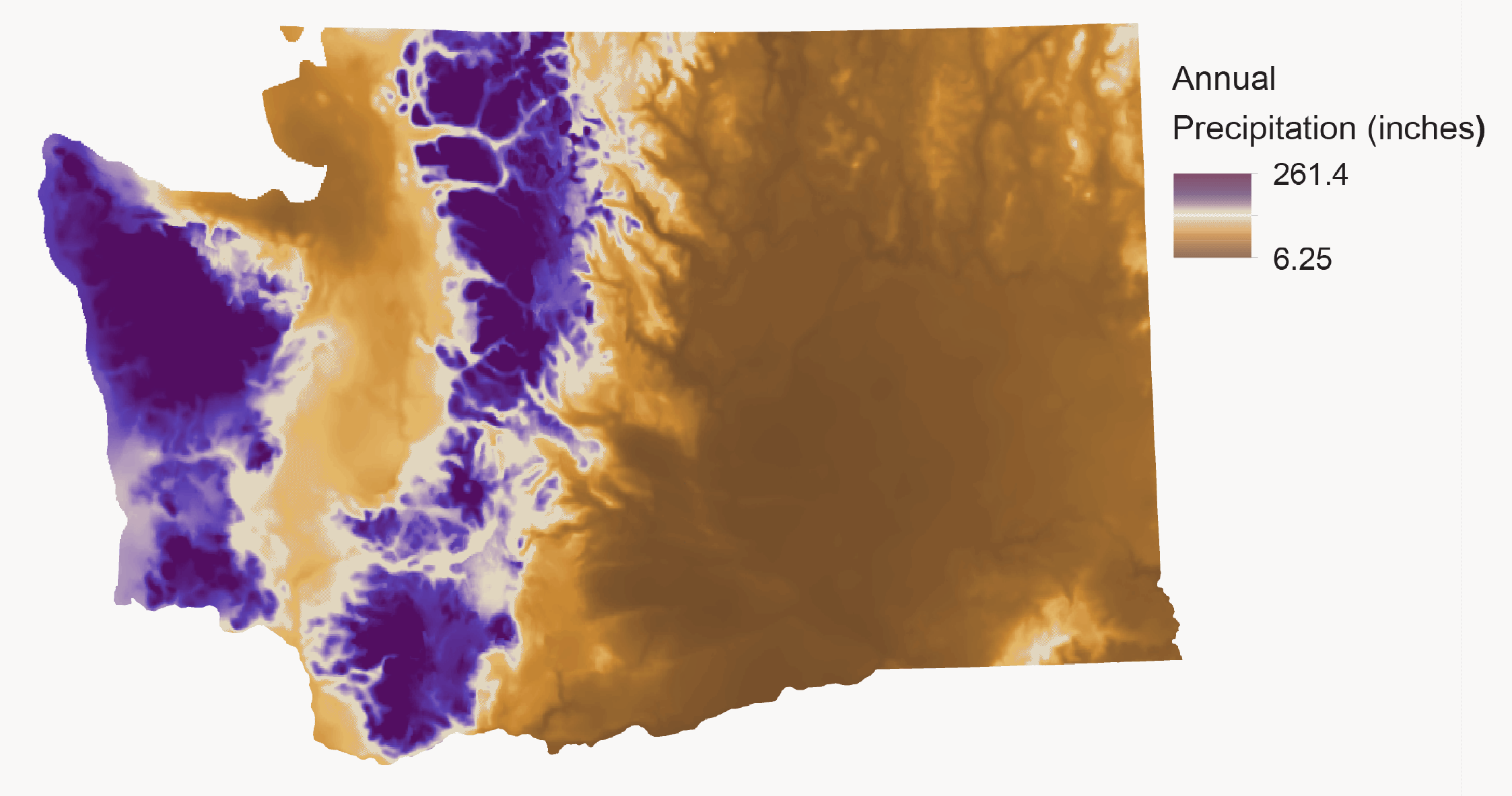 Regional studies of heat flow in Washington were undertaken in the 1980s in partnership with Southern Methodist University, consisting of drilling and logging hundreds of wells for temperature and sampling thermal and mineral springs, resulting in GM-25 and OFR 94-11, among many other publications. For a complete listing from those years, see the Bibliography of Geothermal Resources.

After this point, research and interest dwindled. In recent years, however, the Survey received funding from the Department of Energy to compile geothermal data for cataloguing in the National Geothermal Data System (NGDS), a nationwide data catalog of geothermal resource information. Washington participated in this project between 2010 and 2013, generating over 15 relevant datasets, drilling four new temperature-gradient wells, logging 50 holes of opportunity with temperature logging equipment, sampling 87 springs for major element and isotope chemistry, and geologic mapping and ground-based geophysics within 61 square miles of the Wind River valley near Carson, WA. Most of the data gathered is now available both on the Geothermal Resources theme of our Washington Geologic Information Portal and as ArcGIS geodatabase downloads. We have also published the mapping in the Wind River valley (OFR 2014-01).

Once the NGDS project was complete, we used the new data to model Washington State. This work resulted in the Geothermal Favorability Model of Washington State (OFR 2014-02). The results generally agreed with the favorable areas shown in GM-25, highlighting several zones in the Cascade Range as worthy of attention.

Geologic mapping and the discovery of new faults in the Wind River valley, near the town of Carson, WA. 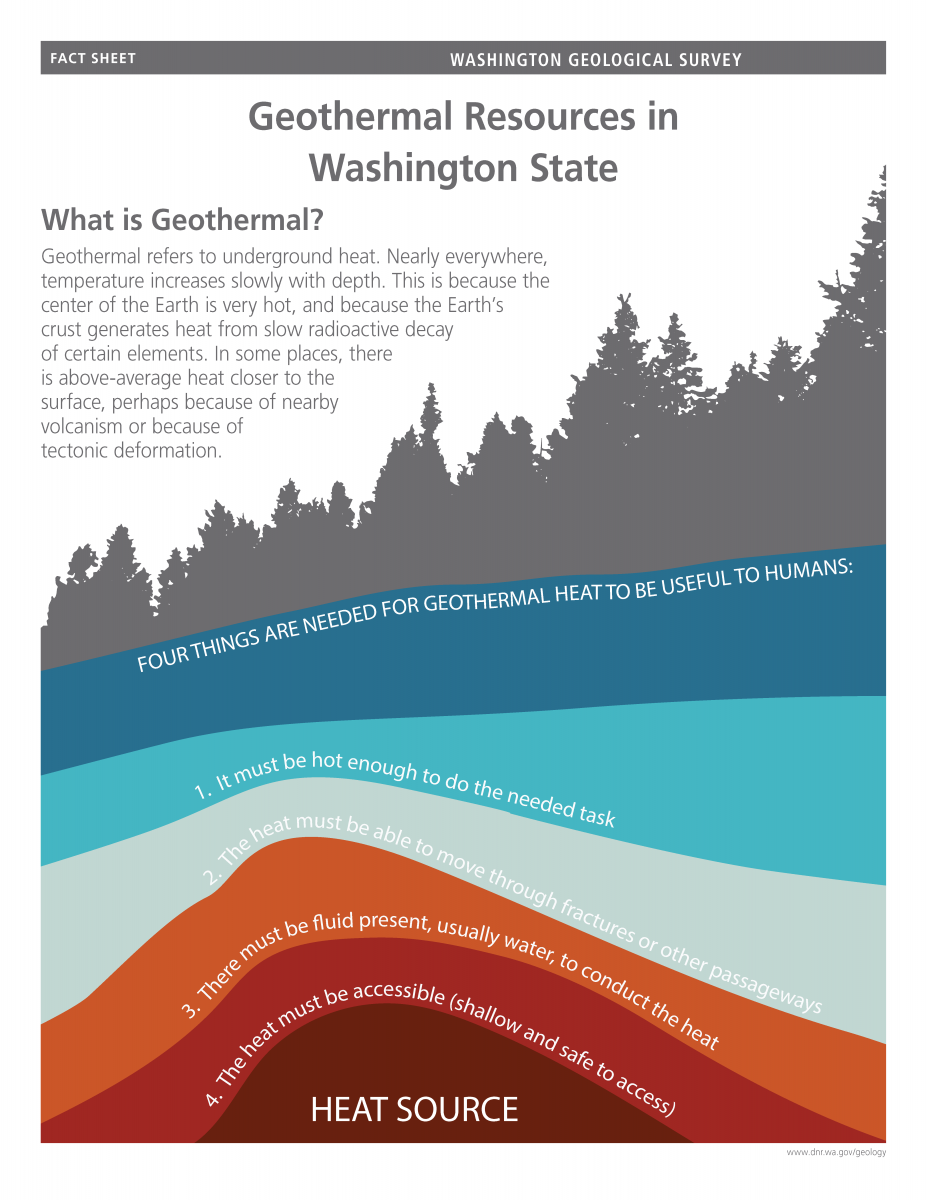 We recently received additional funding from the Department of Energy to further refine the geothermal modeling technique for three locations in the Cascade Range: (1) Mount St. Helens seismic zone, (2) the southeast flank of Mount Baker, and (3) the Wind River valley. We have more detailed data for these areas and they have fewer land-use restrictions.

We are working with partners at AltaRock Energy, BOS Technologies, Temple University, and the U.S. Forest Service. We are also using more advanced techniques to model permeability based on stress and strain parameters in three dimensions. For more information on this project, see the poster we presented at the 2014 Geothermal Resources Council Annual Meeting, or check our our Geothermal Fact Sheet.

Click here to see how much time it typically takes DNR to process and issue these permits. 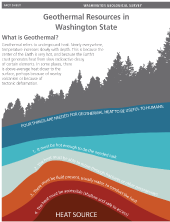 NOTICE
Saturday, Jan. 28, 2023
Some DNR systems may be offline for maintenance and upgrades.