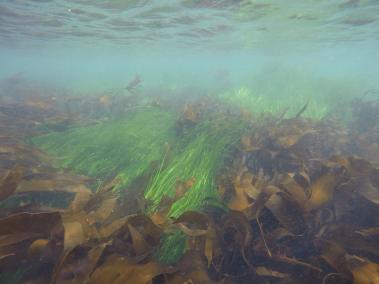 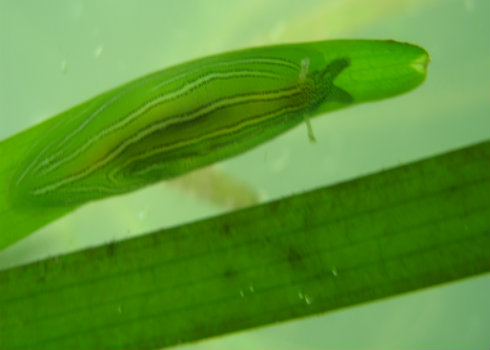 Seagrasses are flowering plants that grow underwater in marine environments. There are six seagrass species in Puget Sound and the Strait of Juan de Fuca. The most widespread are eelgrass (Zostera marina) and the non-native dwarf eelgrass (Zostera japonica). In addition, there are 3 species of surfgrass (Phyllospadix sp.), which grow on rocky substrates in the Strait of Juan de Fuca and the San Juan Islands. The sixth species, Ruppia maritima, is mostly limited to Padilla Bay.
Eelgrass and other seagrass species play a key role in the nearshore ecosystem. They provide food, shelter and nursery habitat for a wide range of organisms, ranging from small invertebrates to commercially important fish species and wading birds. Eelgrass also helps prevent erosion and maintain shoreline stability by anchoring seafloor sediment with its spreading roots and rhizomes.
Seagrasses are used as an indicator of estuary health throughout the world, because of their fast response to changes in water quality. Changes in the abundance or distribution of this resource are likely to reflect changes in environmental conditions. They are also likely to affect many other species that depend on seagrass habitat.
The Washington State Department of Natural Resources monitors the abundance and distribution of eelgrass (Zostera marina) in Greater Puget Sound as part of its stewardship work on state-owned aquatic lands. The results of DNR’s Submerged Vegetation Monitoring Program (SVMP) are used by the Puget Sound Partnership as one of 25 vital signs to track restoration progress (PSP 2014).