The Blue Mountains Province is located in the southeast corner of the state, south of the Snake River. The majority of the Blue Mountains lie within Oregon. Within the rain shadow of the Cascade Range, its arid climate supports a unique ecosystem that differs greatly from mountain ranges to the west. In Washington, rivers running through the mountains carve deep canyons through relatively modest peaks of more than 6,000 feet above sea level. The highest peaks are the Elkhorn Mountains in Oregon, which reach an elevation of 9,108 feet.

Most of the Blue Mountains are underlain by the Columbia River Basalt Group (CRB) lava flows, primarily the Grande Ronde Basalt, which erupted around 16.5 million years ago. Coal and diatomite interbeds within the basalt flows are found within the lower-lying basins. 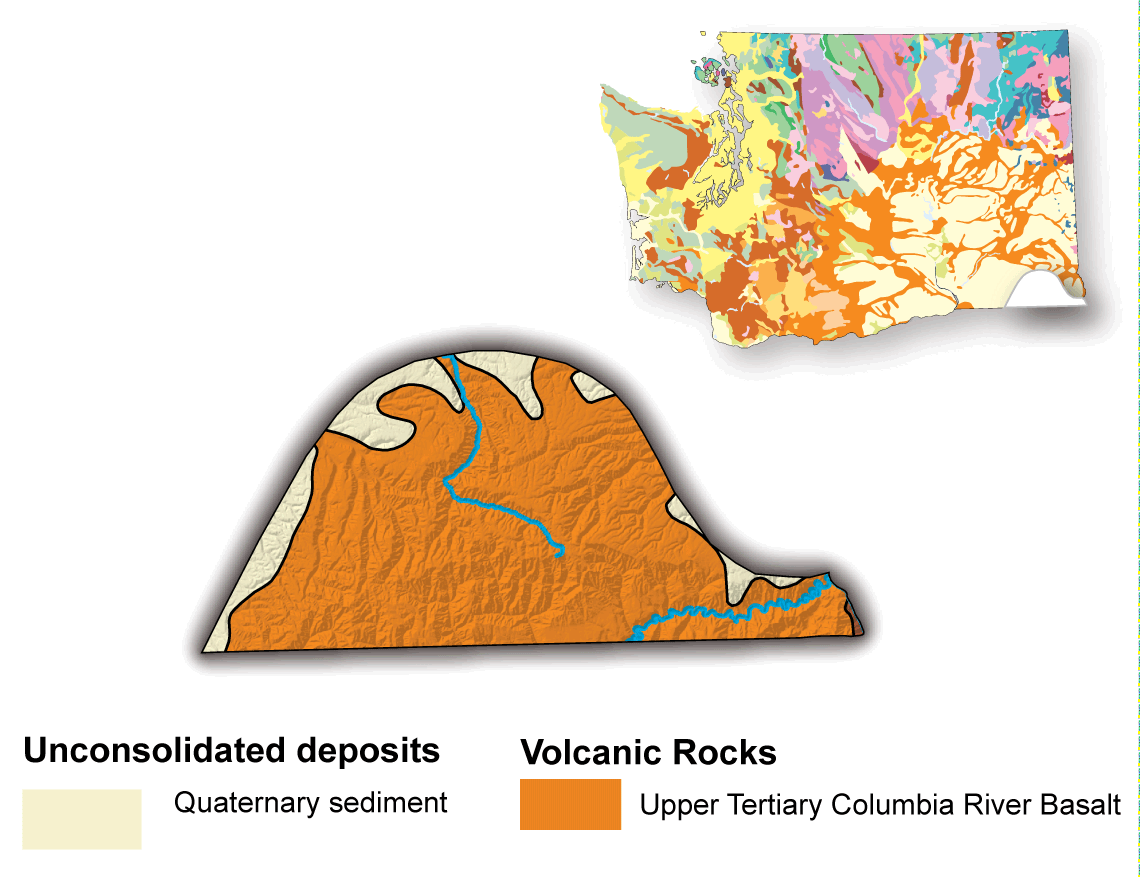 When a volcanic island arc is accreted onto the edge of a continent during the movement of tectonic plates, it is called a terrane. The rocks in the terranes in the Blue Mountains are much older than the Columbia River Basalt Group (by over 100 million years). The majority of these rocks lie to the east into Idaho and only represent 10 to 15 percent of the rocks in the province. Rocks consist of limestone lenses, amphibole-quartz schist, greenstone, graywacke, sandstones, cherty dark claystone, and diorite.

The Columbia River Basalt Group flows covered much of eastern Washington and northern Oregon beginning about 17 million years ago. The Grande Ronde Basalt flows are the most voluminous of the seven CRB formations and represent most of the flows present in the Blue Mountains Province. They erupted from a number of northwest- to southeast-oriented fissures along the border of Washington, Oregon, and Idaho. The fissures are thought to have been generated by the same hot spot now beneath the Yellowstone Caldera. These fissures allowed massive amounts of basalt to erupt quickly. Basaltic lava has a relatively low viscosity, allowing these flows to cover vast areas of the relatively flat terrain.

Click on a formation or member in the table below to see the mapped flow extent, area, and volume.

Interactive diagram showing volume and area of all of the formations and the major members.

The Grouse Creek unit of the Grande Ronde Basalt contains lignite beds between the basalt flows as much as 40 feet thick. While thick sequences of CRBs were erupted in the Blue Mountains area, cooling flows blocked valleys and formed basins upstream. In the vicinity of Troy, at the Oregon-Washington border, one of these blocked drainages became the Troy Basin, and was filled with thick sequences of sediments and decaying organic matter. The peat was buried and exposed to increased temperatures and pressures under the weight of the overlying basalt. Over time, exposure to these increased temperatures and pressures turned the peat into lignite, a type of low-grade coal. Diatomite beds (rock layers created by the shells of tiny single-celled organisms) are also associated with beds within the Troy Basin.

Uplift of the Blue Mountains is attributed to both isostatic rebound of the crust in response to the added weight of the basalt flows, and north-south horizontal tectonic stresses. Isostatic rebound is a reactive force similar to that of a trampoline. When weight is added to the top of a trampoline in a quick manner, the trampoline will exert a force back upwards. In the case of an extremely large volume of basalt flows, the Earth's crust flexes upwards in response.

The uplift was so quick, geologically speaking, that late-stage lava flows did not cover the emerging Blue Mountains. Instead, they only lapped up against the flanks of the newly formed mountain range. Folding and faulting, initiated around 12 to 10 million years ago, is associated with horizontal north-south compression accompanied the uplift. Rapid uplift of the Blue Mountains caused the Grande Ronde, Tucannon, John Day, Umatilla and Walla Walla rivers to carve deep canyons through the basalt and into the underlying geology.