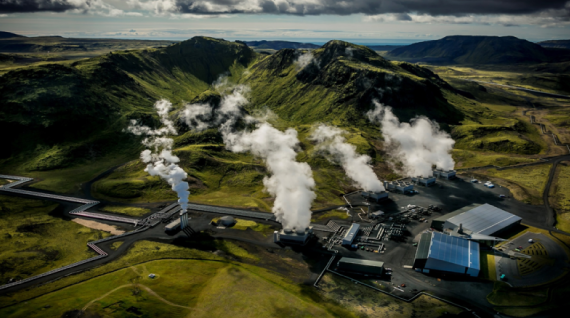 The Hellisheiði Geothermal Power Plant in Hengill, Iceland was the first to inject carbon dioxide into the ground and mineralize it. Photo credit: Sigrg, Wikipedia, (Creative Commons).

Carbon capture and sequestration is a way to trap carbon dioxide before it reaches the atmosphere and contributes to global warming. The carbon dioxide gas is converted into a liquid and then pumped deep into the ground to be buried under thousands of feet of rock. Once underground, the carbon can turn into a mineral, where it can be safely and permanently stored.

When the energy of the sun radiates down to Earth, some of it is absorbed by Earth’s surface while some of it is reflected back into space. Molecules known as greenhouse gases are found in Earth’s atmosphere. These molecules, such as carbon dioxide (CO2), methane (CH4), and nitrous oxide (N2O) trap some of this reflected radiation before it can leave. The layer of greenhouse gases acts much like a blanket, absorbing and trapping heat beneath it that would otherwise escape. This is known as the greenhouse effect. 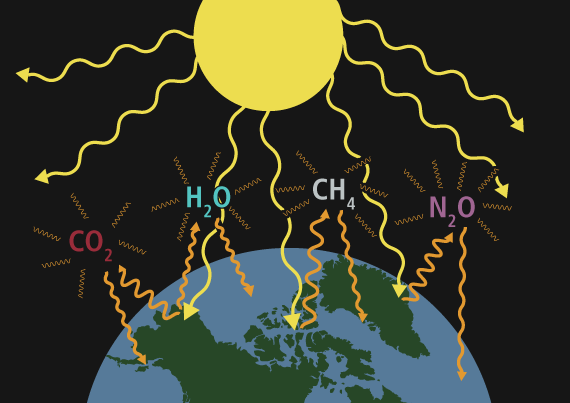 Moderate concentrations of greenhouse gases are good; they keep Earth’s surface from being a cold and harsh environment, like the moon. However, when greenhouse gas concentrations increase, global warming can lead to runaway changes in climate. For example, lighter materials such as snow and ice reflect more sunlight than darker materials such as water and forests. As ice melts due to global warming, more water is exposed, and more plants grow on formerly frozen landscapes. This change allows the earth to absorb more sunlight, leading to even greater global warming.

Human activities have rapidly increased the amount of greenhouse gases in the atmosphere to levels that are higher than at any other point in over 800,000 years. Burning fossil fuels, waste, and wood, and chemical processes such as the manufacture of cement contribute to these large increases in CO2 emissions.

As concentrations of CO2 and other greenhouse gases increase, so does the average temperature of the Earth. According to the World Meteorological Organization, the 20 warmest years on record have occurred in the past 22 years, with the top four being the last four years. These changes have many impacts, including:

Washingtonians emit nearly 100 million tons of CO2 annually, and CO2 accounts for 81 percent of U. S. greenhouse gas emissions. Total Washington emissions have been relatively consistent since 1990, when the Intergovernmental Panel on Climate Change (IPCC) issued its first report. The top three sources of CO2 are transportation (cars, boats, planes, trains), heating for homes and workplaces, and electricity generation. 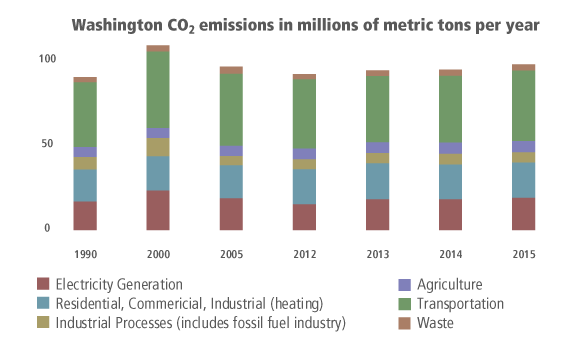 Graph showing Washington State greenhouse gas emissions by type: electricity, heating, industrial processes, transportation, and agriculture and waste (such as trash incineration and sewage processing), and how these changed between 1990 and 2015. Total emissions during this time period were relatively constant at around 96 million metric tons per year.

Point sources are fixed structures where CO2 is emitted. Point source emissions account for about half of all Washington CO2 emissions. The remaining emissions come from vehicle tailpipes and are harder to estimate, let alone to physically capture. 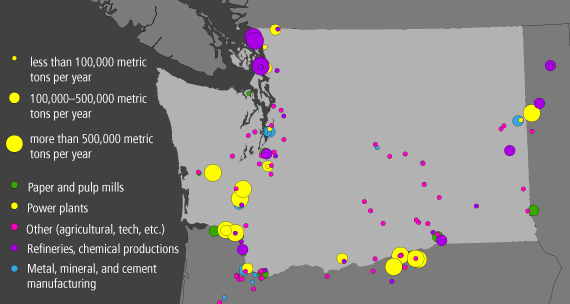 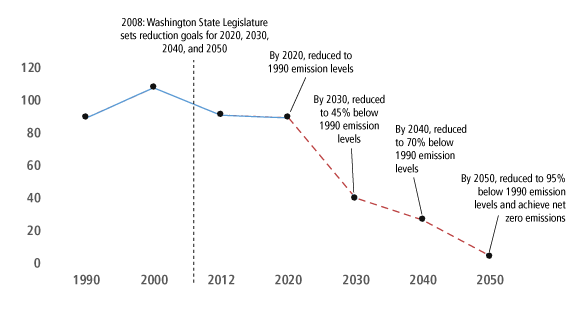 There are many ways to cut carbon dioxide emissions. Decreasing the use of fossil fuels by switching to renewable energy such as solar, wind, or geothermal plays a significant role in preventing more CO2 from entering the atmosphere. Using less carbon-intensive fuels like natural gas also decreases CO2 emissions. Other energy sources such as hydropower and nuclear emit minimal CO2.

Individuals can also help by reducing their own carbon footprint through everyday choices, such as switching off lights when they’re not in use or commuting by bicycle rather than a gas-fueled car.

Solving the problem is not as simple as stopping our use of fossil fuels. Renewable energy sources such as solar, wind, and geothermal do not yet generate enough energy to help stop the current rate of global warming. There are also challenges to switching to renewable energy. For example, hydroelectric dams impact stream ecosystems. In addition, not every geographic location receives enough wind or solar power, and we don’t yet have the technology to efficiently store and distribute these forms of energy.

One way to help reduce our carbon emissions is to ‘capture’ CO2 and store it underground within rocks. This technique is known as carbon sequestration. It involves collecting CO2 at point sources like smokestacks and then transporting it through pipelines that lead deep underground.

Carbon sequestration is already used by oil and gas companies. They first identify significant point sources of CO2, usually smokestacks from factories or power plants. Engineers then separate the CO2 from the other smokestack gases before sending the pure CO2 to compressors. Compressors squeeze the CO2 until it reaches a state similar to liquid. The pressure from the compressors forces the CO2 to flow through pipelines to the well head where pumps send the CO2 down the well and into reservoir pore spaces in the rock, around 3,000 feet or more below the surface. 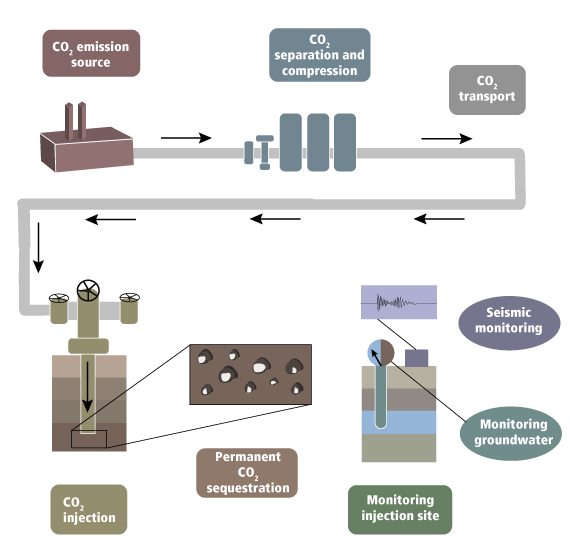 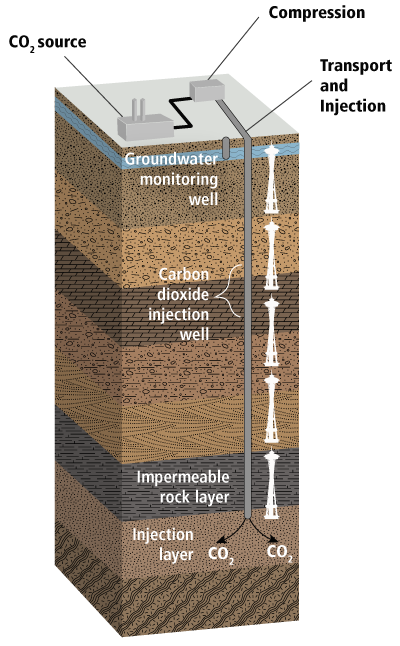 Liquids such as water or oil can be pumped into the tiny holes and cracks in a rock formation, but how do we store carbon dioxide gas?

To store CO2 in the pore spaces of large rock layers (reservoirs), CO2 gas is compressed under very high pressure into a liquid-like state and carefully pumped down wells into reservoirs. The wells are sealed with cement and cast iron plugs. The CO2 resides in the pore spaces of the reservoir, where it crystallizes into minerals over the course of several months to a few years. Overlying seal rocks hold back the CO2, preventing it from flowing to the surface or into other rock layers.

Core plug drilled from Wallula Gap well before injection of carbon dioxide. Some minerals have already formed within the pore spaces from groundwater flowing through. Image from McGrail and Schaef (2015) project report from PNNL to the U. S. DOE. 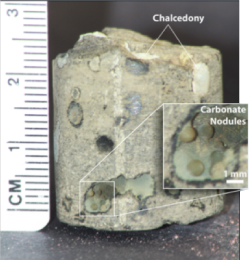 Core plug drilled from Wallula Gap well two years after injection of carbon dioxide. The carbon dioxide has started interacting with the basalt rock to form a mineral known as ankerite. Image from McGrail and Schaef (2015) project report from PNNL to the U. S. DOE.

Sandstone and basalt are typical rock types that are used for storing CO2, and both are common in Washington State. Western Washington hosts conventional sandstone reservoirs while eastern Washington hosts basalt. The basalt, in particular, offers a unique opportunity for sequestration. Studies show that basalt can mineralize CO2 much faster than sandstone—within years instead of tens of thousands of years. The Columbia River Basalt Group consists of extensive ancient lava flows that cover ~210,000 km2 of eastern Washington and parts of Oregon and Idaho. This layer cake of basaltic rock is excellent for CO2 sequestration.

Any engineering solution has inherent risks. Carbon sequestration projects can produce undesired outcomes such as induced seismicity, accidental hydraulic fracture, well underperformance, or CO2 leakage. The National Energy Technology Laboratory can help track and monitor these risks. There is also the potential for putting communities at risk through unfair economic, social, or health consequences. WGS will seek to open dialogue with the public about the risks and benefits of carbon sequestration.

Though carbon sequestration has become popular recently, it has been used by the oil and gas industry since the 1970s. The oil industry has been pumping CO2 into geologic formations in a process known as Enhanced Oil Recovery (EOR). EOR is a method where CO2 is injected into rock layers in order to force out any remaining oil trapped in pore spaces. The longest running example of EOR is the SACROC oilfield in west Texas’s Permian Basin.

Early experiments have also been done to inject CO2 into the earth for the purposes of long-term storage, rather than oil extraction. In 2009, the Big Sky Regional Carbon Sequestration Partnership drilled a 4,000 foot deep well into Columbia River basalts at Wallula Gap in southeastern Washington. In 2013, the partnership injected 977 tonnes of compressed CO2 into the well over a three week period and monitored the results for three years afterward. Results of the scientific monitoring show that 60 percent of the CO2 crystallized into minerals such as ankerite (similar to dolomite and limestone) within two years of injection. The remaining liquid CO2 is in the process of solidifying. The chemical reactions that turn the CO2 from liquid to solid occur quickly at first, followed by slower reaction rates. Scientists monitoring the Wallula well expected this slowing of reaction rates, but they were pleased by how much of the CO2 solidified within the first two years after injection. 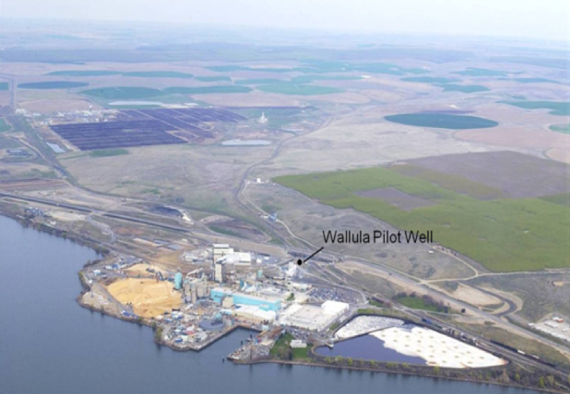 Image of Wallula Gap test well from McGrail and Schaef (2015) project report from PNNL to the U. S. DOE.

The Wallula Gap test well proved that a single well can pump nearly 1,000 tons of CO2 into basalt. The CO2 was captured at a cardboard box manufacturing plant (Boise White Paper, LLC), compressed, and piped to a wellsite. The limited scale of this pilot project, and the enormous quantity of basalt in Washington State, mean that this permanent sequestration process can be dramatically scaled up. If we carefully select, drill, and pump CO2 back into the ground, we can reduce the amount of CO2 that reaches the atmosphere and slow the negative effects of climate change.

Mineralizing CO2 permanently eliminates the risk of gas leaking into the atmosphere. CarbFix, a similar project in basalt CO2 sequestration in Iceland, showed that nearly 100 percent of 175 tonnes of CO2 injected in 2012 mineralized within two years. The Icelandic experiment injected a smaller quantity of CO2 dissolved in water rather than a large quantity of CO2 compressed to a near-liquid state. Although the solidification rate of the Iceland experiment was higher than the Wallula solidification rate, the Iceland experiment required large quantities of fresh water. These two experiments show that it is possible to permanently lock away CO2 on a large scale.

CUSP stands for Carbon Utilization and Storage Partnership, and it is a project that focuses on the western U.S. The project was spurred by public support for climate change solutions and the economic incentive in the tax code. In 2019, WGS received funding from the DOE in partnership with 18 other partner agencies, forming CUSP. The 18 partners include state geological surveys, national labs, and universities. CUSP seeks the best way to link emission sources to the underground reservoirs in which to store them. 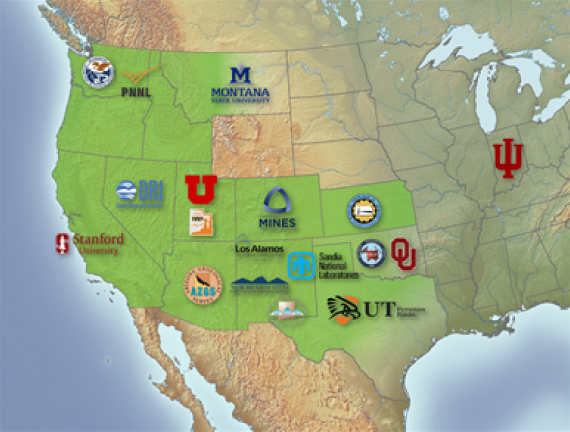 As a partner in CUSP, WGS shares where we think CO2 should be stored with other CUSP members. To do this, WGS looks at information from hundreds of old, deep wells across Washington State. When these wells were drilled, workers lowered tools down the wells and recorded details about the rocks in the wells on graphs called well logs. WGS uses these graphs to identify good reservoir zones in each well. Then WGS links these reservoir zones together in a three-dimensional connect-the-dots pattern to draw maps showing the best locations and depths to store CO2. WGS gives these maps to CUSP, and CUSP connects our maps of the best reservoir zones to other maps we help them collect, like maps of emissions sources, pipelines, railways, roadways, and social impact maps that show where people live and how projects might affect them. The resulting combination of maps will give the public, the government, and industry the facts they need to choose the best way to store CO2 underground and help meet our goal of reducing CO2 in the atmosphere. 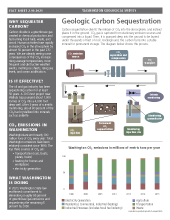