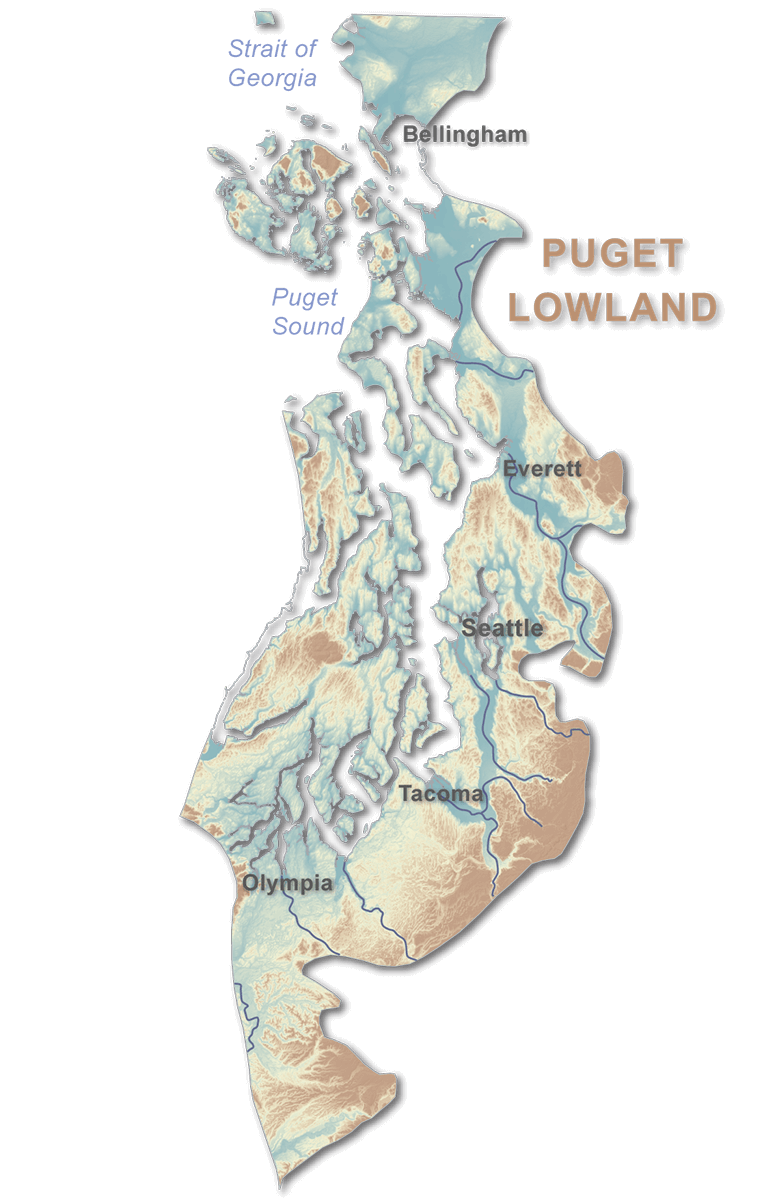 The Puget Lowland region is a wide low-lying area between the Cascade Range to the east and the Olympic Mountains to the west. The region extends from the San Juan Islands in the north to past the southern end of the Puget Sound. It is known for its scenic coastlines, bustling urban ports, and rich farmlands to the south. The natural resources and the geologic history of the Puget Sound and surrounding areas have helped to shape the history of the Washington state. 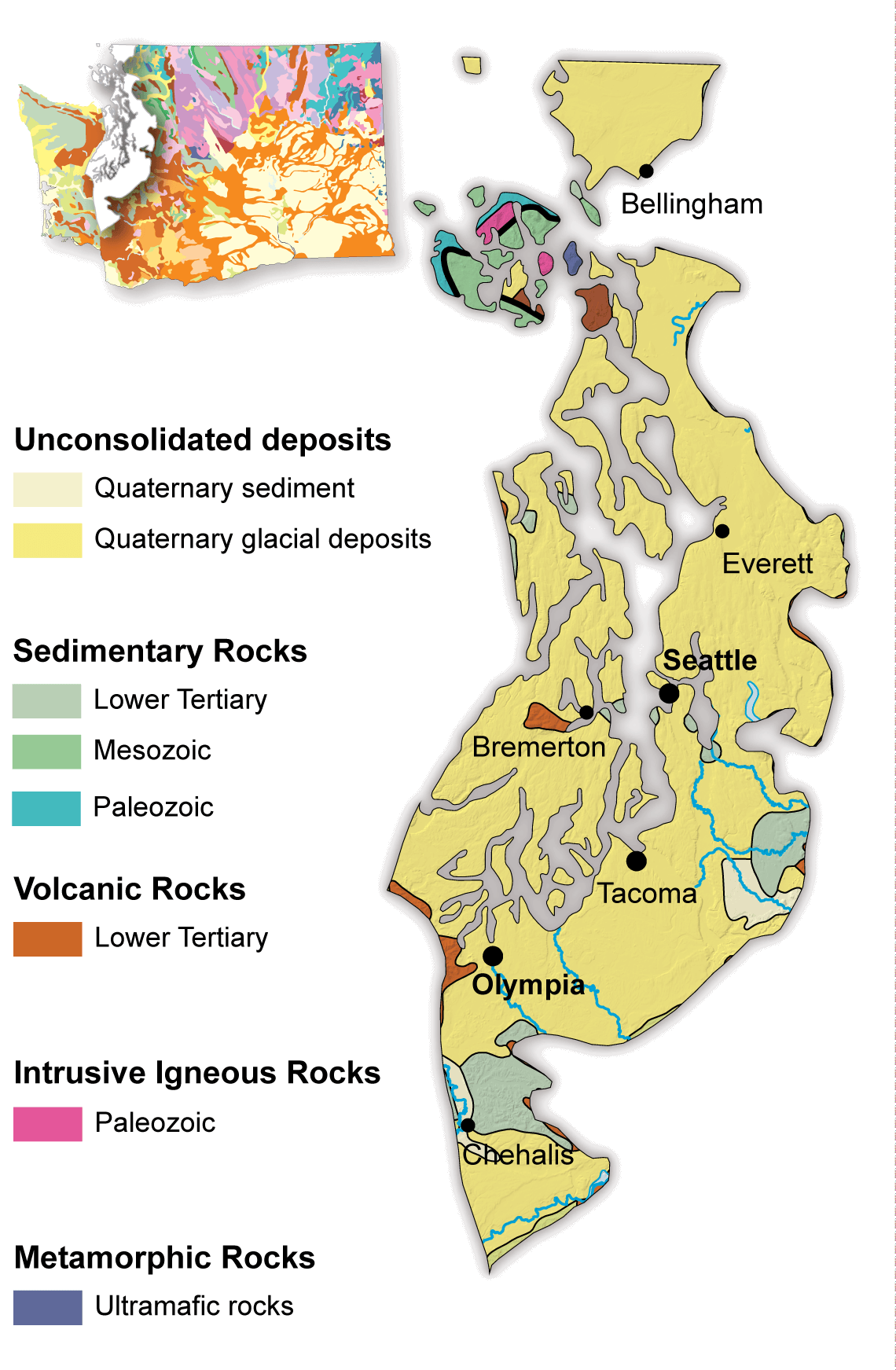 A wide variety of rock types can be found in the Puget Lowland. A curious observer will find rocks that have formed from ancient volcanoes similar to that of Mount St. Helens and Mount Rainier. There are even metamorphic rocks that have formed under the extreme temperatures and pressures that are caused by the forces of plate tectonics. Some of the metamorphic rocks of the San Juan Islands were accreted to North America over 160 million years ago. Some of the oldest marine sedimentary rocks in the area date back almost 400 million years.

The most abundant and widespread geologic units in the Puget Lowland are not actually rocks, but sediments that are patiently waiting to become rocks. These sediments were left behind by glaciers that advanced as many as five times into the Puget Sound area within the last 2 million years, most recently about 15,000 years ago. 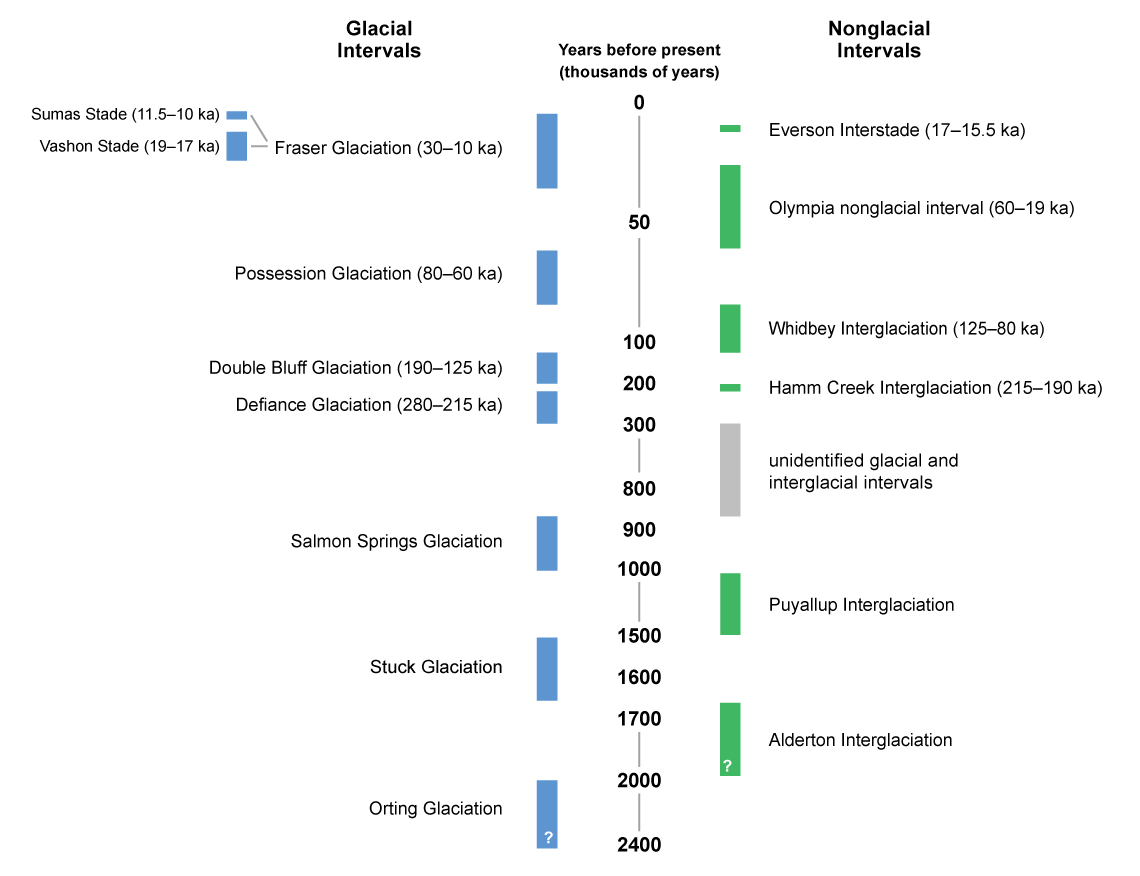 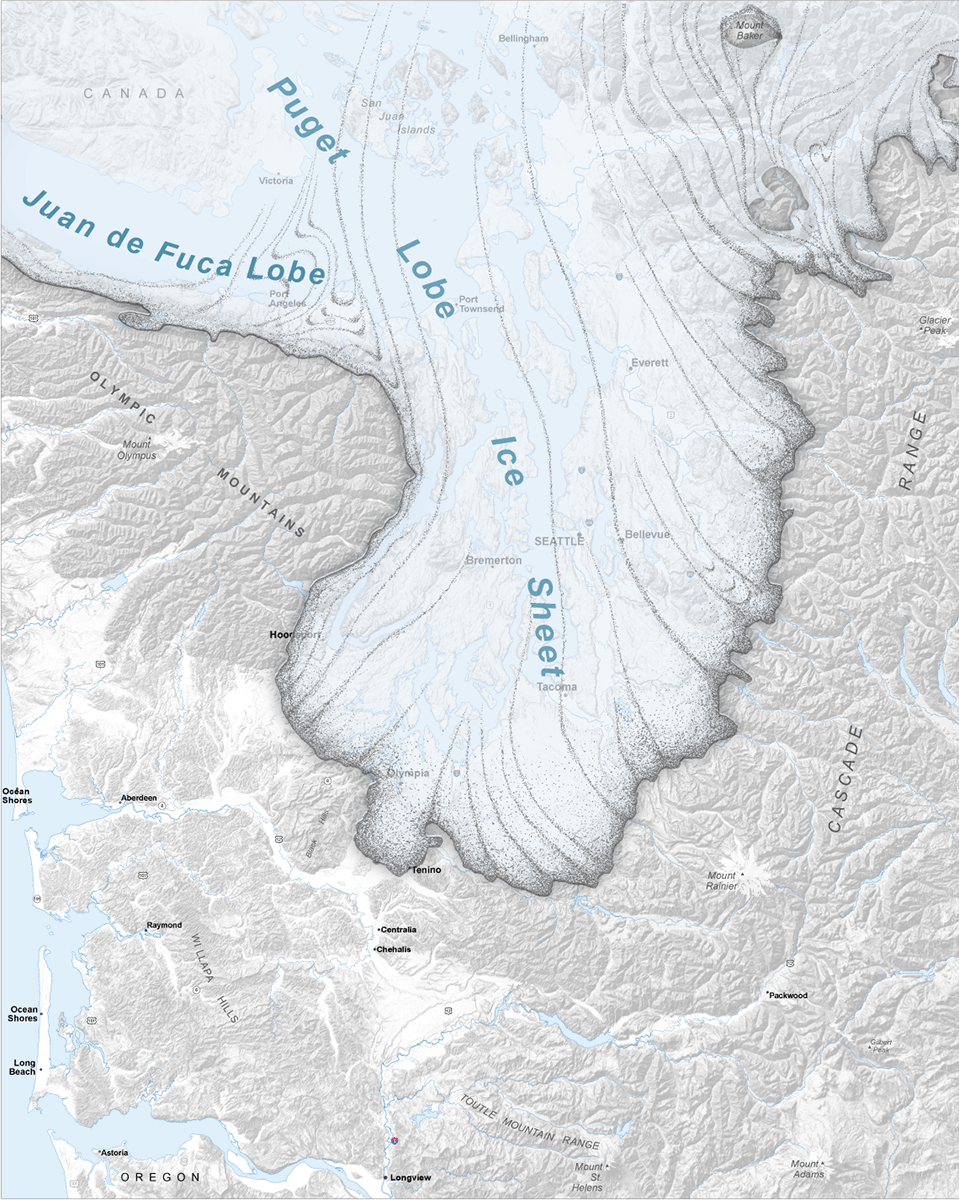 Extent of the Puget Lobe of the Cordilleran Ice Sheet during the latest ice advance.

Glaciers are ice sheets that can be thousands of feet thick and are exceptionally talented at transforming landscapes. It was during the Vashon Stade (the latest ice advance and retreat about 15,000–12,000 years ago) that the Puget Lowland got the extreme make-over that we see today.

As glaciers scour the landscape they flow over, sediment is collected and transported within, beneath, and above the ice. Glaciers are capable of moving the smallest of clay particles to very large boulders. Sediment is also transported in milky, silt-laden meltwater streams in front of the glacier’s toe.

The glaciers left behind many features in the landscape that are fun to identify. 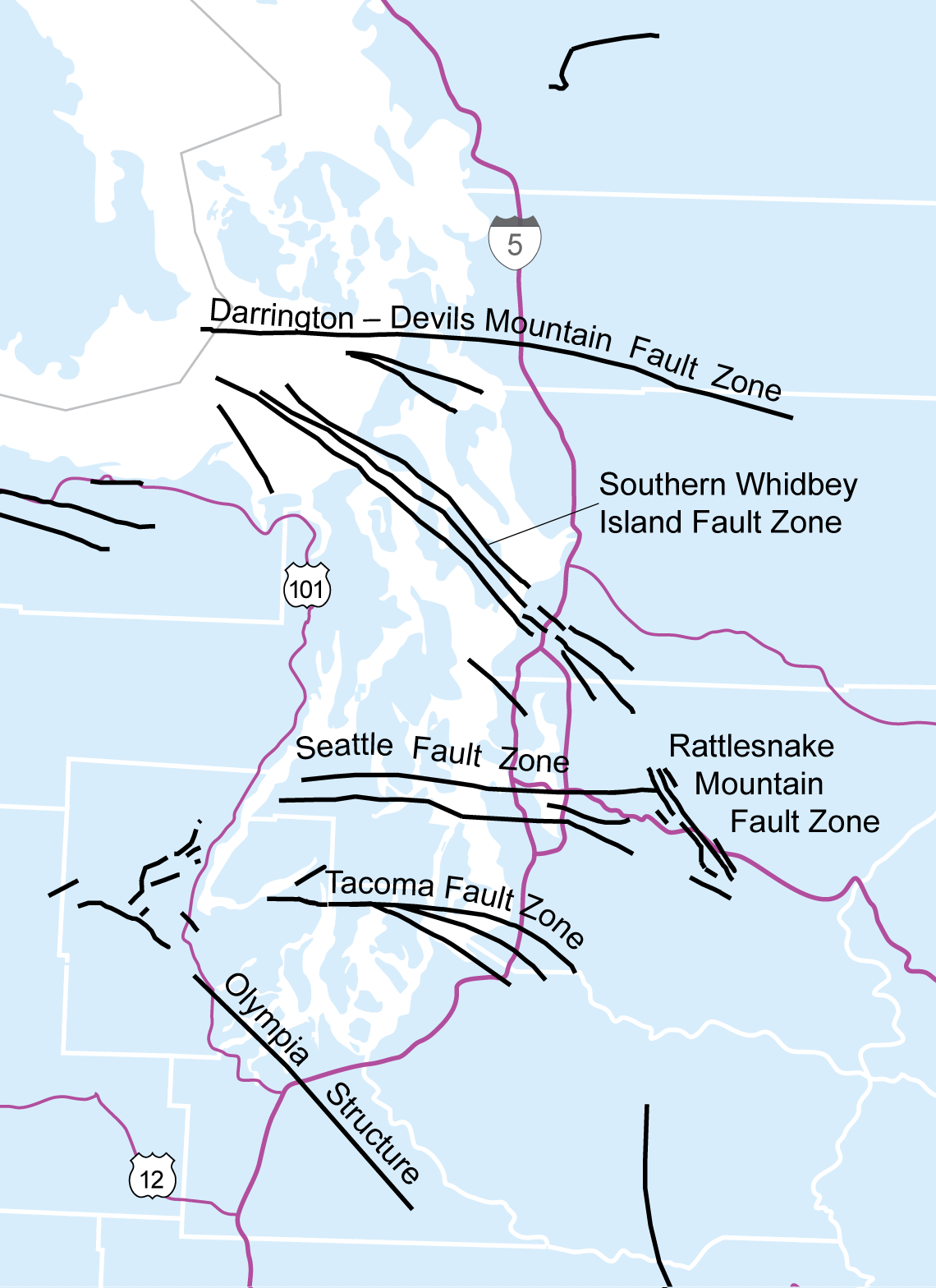 Several major fault zones traverse the province, including the Seattle Fault, the Tacoma fault, the southern Whidbey Island fault, and the Darrington–Devils Mountain fault zone. These faults are capable of producing earthquakes and lie within densely populated areas.

Because of the hazards earthquakes along these fault zones pose to the public, they are still being studied to determine full extent and potential hazard. The growing use of lidar and geophysics, as well as continued detailed geologic mapping, result in new faults discovered in the Puget Lowland every year.

Mysterious features in the landscape can be found in the southern Puget Lowland, called Mima Mounds. Named for the type locality at the Mima Mounds Natural Area Preserve, Mima mounds are circular, chest-high dome-shaped mounds found in randomly spaced clusters, and are composed of dark gravelly soil.

There are many theories as to how the Mima Mounds formed. Some postulate they formed from giant burrowing pocket gophers, others think they were created during earthquakes, and another contingent supports the idea that the clay in the soil shrinks and swells with varying water conditions. Weirdly, in the southern Puget Lowland, most of the Mima Mound fields lie solely within recessional glacial outwash deposits. Whatever their cause, they're pretty fascinating features.

Retired Division geologist Josh Logan examining a Mima Mound in a excavation. Note the rich soil within the mound directly above recessional sand and gravel.

This lidar image of Tenalquot Prairie doesn't have the measles. It has the Mimas.

The principle natural resource of the Puget Lowland is sand and gravel aggregate left behind by the glaciers. Gravel pits provide critical raw construction resources to the area.

Historically, coal was mined extensively in underground workings within older sedimentary rocks along the eastern foothills of the Cascade Range near Cumberland and Black Diamond as well as the Bellingham area.

Chambers Bay Golf Course, home to the 2015 U.S. Open, is a reclaimed gravel mine in University Place. The "Ruins" shown above were once used for keeping different sizes of aggregate separate. Photo credit: Michael D. Martin (Flickr Creative Commons)