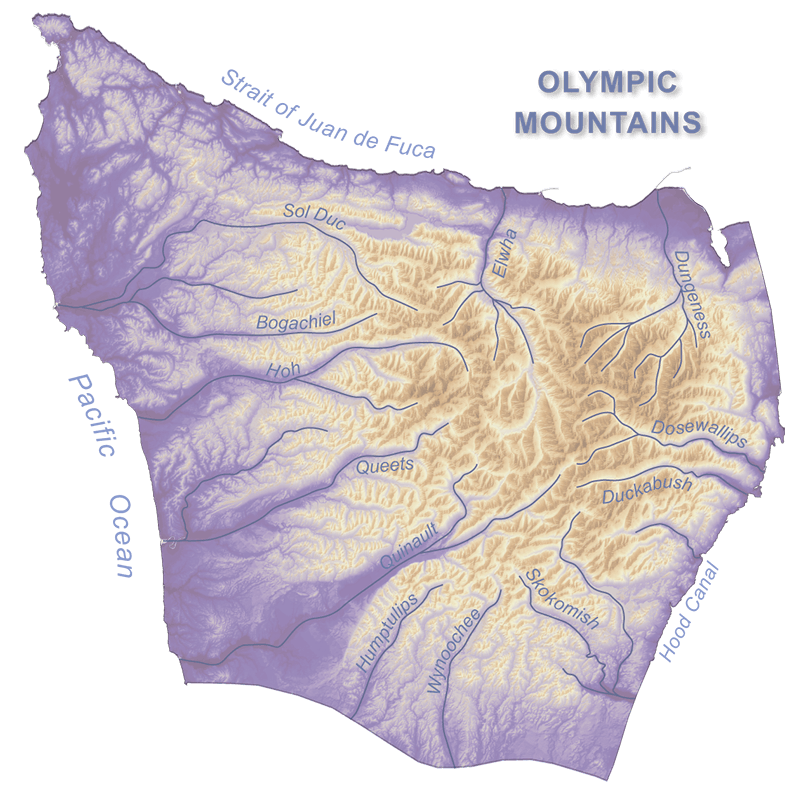 The Olympic Mountain Province, located in the northwest corner of the state, is composed of a mountain range that rises from the Pacific Ocean to an elevation of 7,980 feet at the peak of Mount Olympus. The mountain range is bounded on three sides by the waters of the Pacific Ocean to the west, Puget Sound to the east, and the Strait of Juan de Fuca to the north. The higher peaks are covered with glaciers and snowfields, feeding the many rivers that radiate outward from the center of the range. The enormous amount of rain and snow that falls on this mountain range feeds the glaciers and streams as well as the lush rain forest that covers most of the western side of the province.

The Olympic Mountains are comprised of a large uplifted and folded section of oceanic crust that was accreted onto the continent over the last 40 million years at the margin of the Cascadia subduction zone. The range is cored by highly folded and disrupted sedimentary and metamorphic rocks, which are flanked to the east by a horsheshoe-shaped border of Crescent Formation basalt and overlying sedimentary rocks. These rocks are locally covered by young glacial and non-glacial sediments. 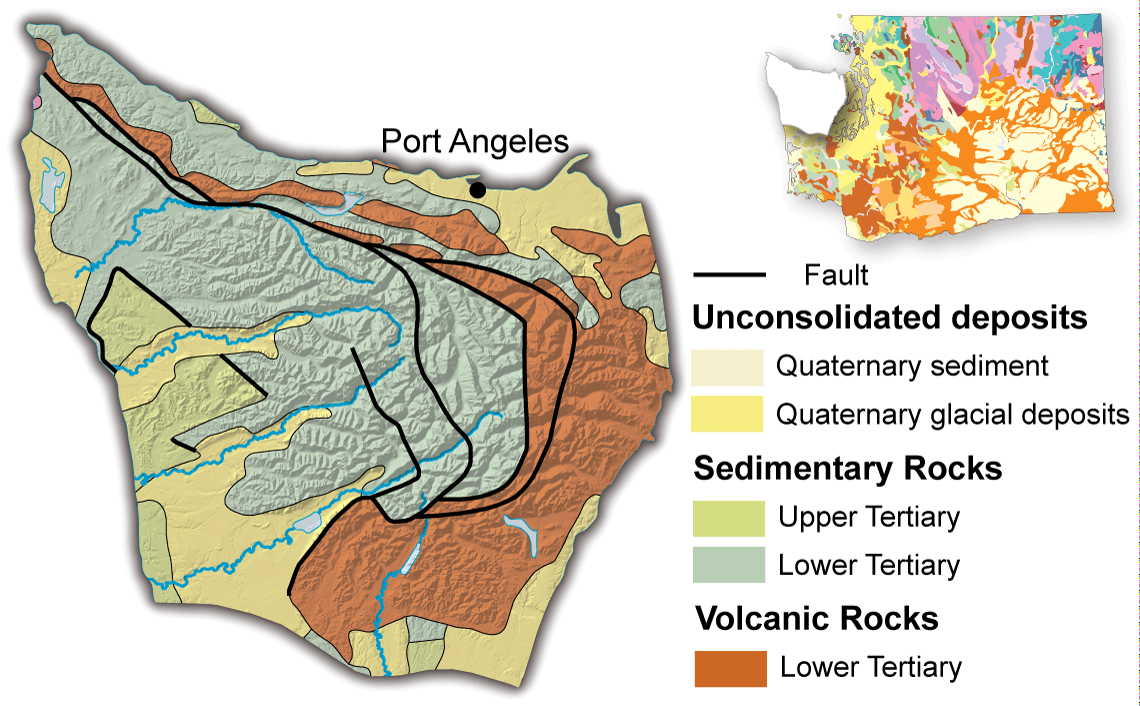 There are three main rock types in the Olympics: sandstone, shale, and basalt. Most of these rocks originated underwater in the Pacific Ocean.

Sediment (sand and mud) was carried onto the ocean floor by rivers and were deposited layer by layer onto the ocean bottom. Basalt (or volcanic rock) was erupted from underwater volcanoes, and flowed on top of the sediment. This underwater deposition of alternating sand, mud, and basalt happened for 40 million years (from about 55 Ma to 15 million years ago). Nowadays, these rocks make up the Olympic Mountains. How did they get there?

Subduction caused the oceanic rocks to fold and break as they moved closer and closer to the continent. Along the edge of the continent, sediment was scraped off and stacked, forming what is called an accretionary wedge. During subduction, some of the oceanic crust was also thrust onto the continent. Heat and pressure from the thickening pile of sediment caused metamorphism, resulting in rocks like shale, schist, phyllite, and greenstone. Over time, these rocks were jumbled and chaotically mixed into what is called a 'mélange'. 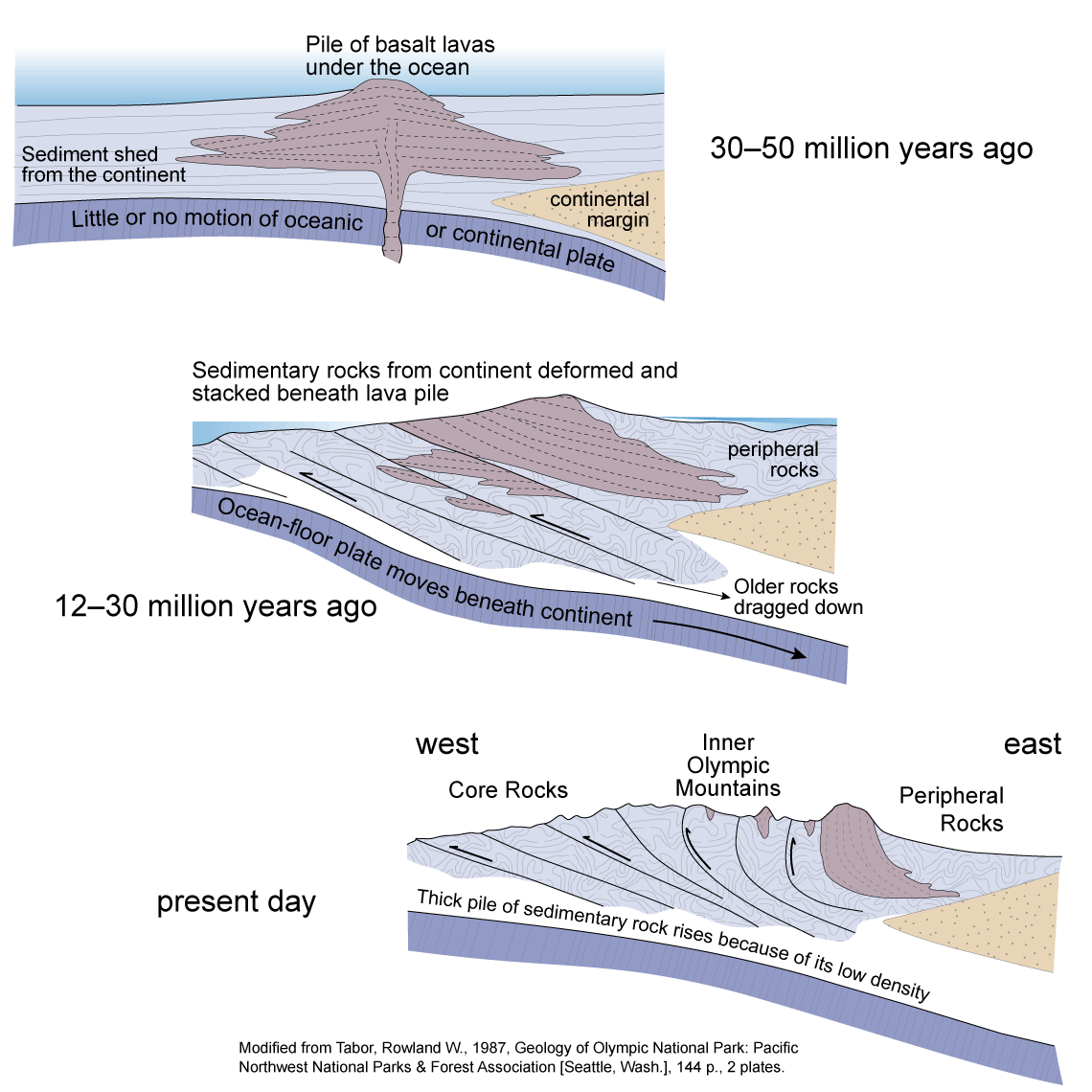 Over time, subduction off the coast caused the oceanic crust and accretionary wedge to uplift into a mountain-range-scale horseshoe-shaped fold. Today, metamorphosed sedimentary rocks lie in the core of the mountain range, and the oceanic basalt lies along the periphery. Geologists call this basalt the Crescent Formation.

The Olympic Mountains are eroded and carved by running water, glacial ice, and gravity. Together these three erosional processes work together to carve the landscape and carry the material from the mountains back to the sea.

As the Olympic Mountains continue to uplift, they capture more moisture from the storms that come from the ocean toward the land. Rivers within the mountain range form a radial drainage pattern, flowing away from the center of domal uplift (imagine what would happen to water poured from a cup onto a bald person’s head—the water would run off in all directions).

These rivers carry massive amounts of water from the high Olympic Mountains, where it rains an average of 140 to 200 inches a year, (more than any other place in the continental U.S.) to the ocean.

The alpine glaciers that nest year round high in the Olympic Mountains are relicts of the recent ice age, which began about 2 million years ago. During the last ice advance about 15,000 years ago, a large sheet of ice, called the Cordilleran Ice Sheet, moved down from western Canada and into Washington. The ice sheet crept southward into the northern Puget Sound region and bumped up against the Olympics, where it split into two lobes. One lobe went out into the Strait of Juan de Fuca toward the Pacific Ocean, and the Puget Lobe moved south and filled what is now the Puget Lowland. Deposits from this glaciation can be found on the eastern and northern edges of this province. 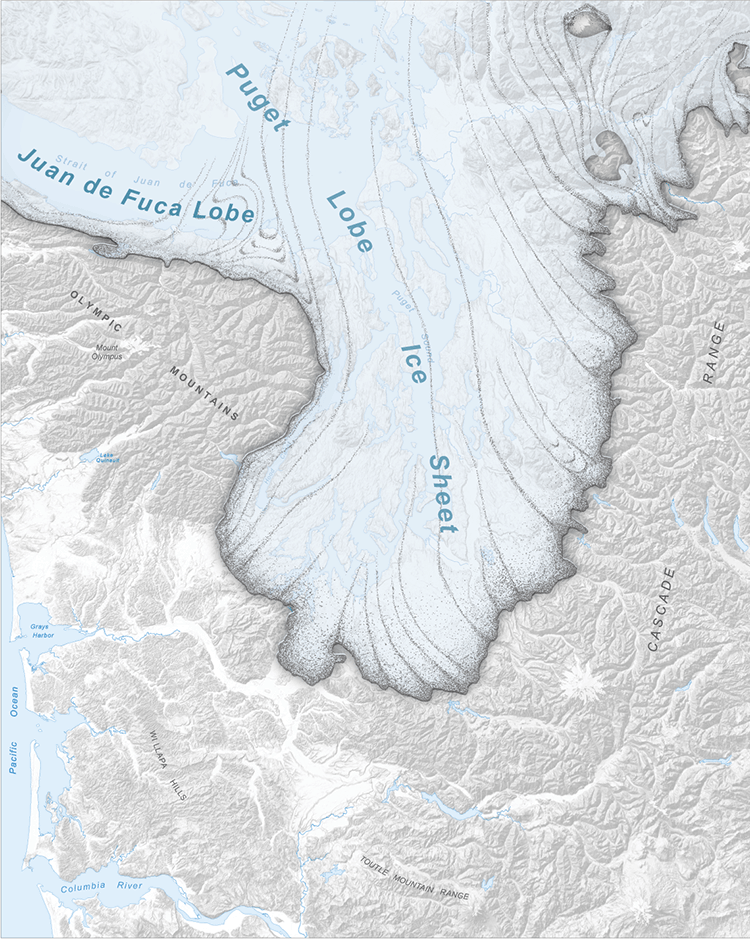 The ice sheet sculpted the land and deposited massive amounts of sediment along the northern and eastern edges of the mountain range to elevations of about 1,500 feet. Some of the rocks that the glaciers carried are as large as houses. About 13,000 years ago, the world became warmer and the ice began to melt. The Cordilleran ice sheet retreated (melted away towards the north) and the alpine glaciers that covered the Olympics mostly disappeared.

In summer, the water that melts from the remaining alpine glaciers contains loads of silt, sand, and gravel supplied by the glaciers. When there is abundant sediment in the water, the river cuts through the rock much faster than rivers not fed by glaciers (kind of like sandpaper).

Click on the feature labels to learn more about the parts of a glacier.

Pervasive manganese deposits are found in the northern part of the province within limestone interbedded in the Crescent Formation basalt. Some manganese deposits were large enough to be mined—the largest mine was the Crescent mine, producing over 50,000 tons of manganese ore. Red jasper may be found near the manganese deposits. The Crescent Formation basalt also hosts native copper grains and other copper minerals. Beautiful zeolite specimens may be found in the pillow basalts. Several gold placer deposits were mined historically along the coast within beach sands. Cinnabar, galena, and quartz crystals have also been reported in the province.