*Committed funds include: estimates of what will be needed for projects already underway, for agency overhead, and for program administration.
Agencies planning a removal project should contact DNR prior to the removal to verify availability of funds. 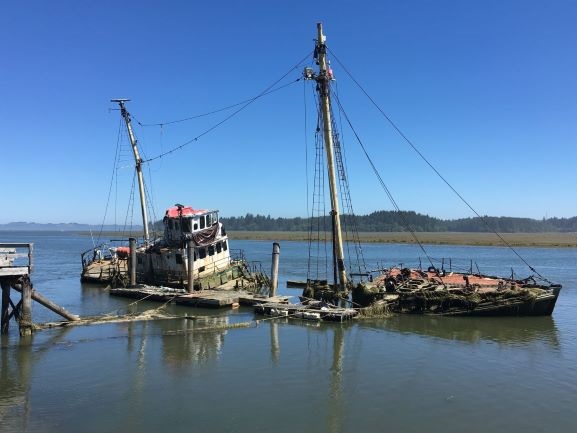 Research Vessel Hero built for the National Science Foundation (NSF) to do marine research around Palmer Station, Antarctica.
125 feet long, 30 feet 4 inches breadth, 300 tons displaced, 14 feet draft.
In March 1985, the Port of Umpqua (Reedsport, Oregon) acquired the Hero from NSF for $5,000 through a U. S. Government surplus property disposal program. Later that year a group of local citizens formed the nonprofit International Oceanographic Hero Foundation to preserve and promote the Hero as part of an educational research center and museum. In 2008, after changing hands a few more times it ended up in Bay Center, WA on the Palix River, a tributary to Willapa Bay (one of the largest shellfish aquaculture areas in the state). March 2017 the Hero sank at its dock in the Palix River. The vessel’s remains were deteriorating while the state tried to find funding for its removal. A special appropriation for the HERO was recently approved and we expect the vessel to be removed by the end of summer 2022.

DNR is directed by statute to create informal guidelines for prioritizing removal projects for reimbursement purposes when the Derelict Vessel Removal Account is to be used. These criteria were updated based on changes made during the 2013 Washington State Legislative session. When funding is limited, expenditures for removing higher priority vessels are generally reimbursed first. DNR may reimburse authorized public entities for removal of derelict or abandoned vessels of lower priority when DNR determines that adequate funds will remain in the Derelict Vessel Removal Account. For example, DNR may choose to approve removal of lower priority vessels if removing a number of vessels in the same geographic area is more cost effective.
DNR keeps an inventory of “vessels of concern” that are ranked by priority for DVRA funding based on the following criteria (lowest number = highest priority). Note: Severity of potential threats to human health and safety and the environment will be evaluated based on many factors, including but not limited to:

Examples: vessels adrift, sinking, dragging anchor, badly anchored/moored, pumps barely keeping up with water intake, beached and breaking up, sunk in a navigation channel, or presenting environmental risk such as leaking fuel or other hazardous materials.

Examples: vessels sunk near a boat launch; vessels beached near a public access area, vessels abandoned and unattended in an area of high current or vessel traffic, vessels that need to be pumped continuously to stay afloat and are not tied to shore power, vessels sunk where they may be a hazard to small vessel navigation (e.g., sunk just under the surface), and vessels in advanced state of deterioration and/or dismantled-particularly those with fuel on board.

Any vessel, floating or sunken, that doesn't meet one of the previous categories but still poses a direct threat to any of the elements of the natural environment, including vessels that impact:

Examples: vessels that are in proximity to shellfish beds or public beaches, sunk or abandoned in or near a marine reserve, aground on surf smelt or sand lance habitat, or creating barriers to fish passage.

Priority 5 Other abandoned or derelict vessels

These lists change frequently but are updated on the website quarterly. For up-to-date information please contact the Derelict Vessel Removal Program at dvrp@dnr.wa.gov.
Derelict or Abandoned Vessels: Inventory of Vessels of Concern — Updated December 6, 2022.
List of vessels that DNR has identified as potentially derelict or abandoned. Vessels are listed in order of priority; however, as explained above, this order doesn’t necessarily correspond with the order of removal.
Derelict or Abandoned Vessels: Removals Completed — Updated December 6, 2022.
List of all the vessels that the Derelict Vessel Removal Program has removed since the program began. The Project ID numbers on these lists consist of a two digit county code, the year the vessel was reported, and the order in which the vessel was reported to DNR. For example, PI06-008 would be the eighth vessel reported in Pierce County in 2006.