Whiteman Cove is located in south Puget Sound in Pierce County on the west side of the Key Peninsula along Case Inlet.

Historically, Whiteman Cove was a shallow estuary protected by a natural isthmus.  Tidal water historically flowed in and out of the estuary through a natural opening at the northwest corner.
The Washington State Department of Natural Resources (DNR) is working to remove a fish passage barrier between Whiteman Cove and Case Inlet to fulfill its responsibilities for meeting the injunction laid out in the 2013 federal court ruling in U.S. v. Washington.
This project will directly benefit Puget Sound salmon recovery and the recovery of Southern Resident Orcas. Returning the cove to a tidal estuary, with the accompanying regular tidal exchange will also eliminate seasonal high coliform bacteria levels that exceed state water quality contact recreational criteria. Restoring tidal flow and salmonid passage between Whiteman Cove and Case Inlet has been identified as a high priority for salmon restoration by the South Sound Salmon Recovery Group and Wild Fish Conservancy.

The 2013 federal ruling required the state to restore fish passage for “all species of salmon at all life stages at all flows where the fish would naturally seek passage.” In its 2013 Memorandum Opinion, the court recognized that “fish blockages or barriers are caused by dams, culverts, tide gates, dikes, and other instream structures.
U.S. v Washington partially fulfills the obligations of the treaties negotiated by territorial Governor Isaac Stevens in 1854-55 that guaranteed fishing rights to the signatory tribes.  These included five treaties with 21 tribes with usual and accustomed fishing areas in Western Washington. Whiteman Cove is located within the area included in the Medicine Creek Treaty of 1854, in which the tribes ceded 4,000 square miles (2.5 million acres) to the U.S. government in exchange for the preservation of tribal fishing rights.

DNR has held multiple meetings and updates on therestoration project with Tribal governments, Camp Colman and Whiteman Cove property owners. Based on the input from these collaborations, DNR enlisted Anchor QEA to complete a Feasibility Study in 2020 that evaluated four options for the project:
Option 1:  New tide gate control structure
Option 2:  New weir control structure
Option 3:  Open channel and bridge to maintain current access to Camp Colman
Option 4:  Open channel and construction of new road along existing undeveloped county right-of-way
At the request of the Seattle YMCA, Anchor QEA also worked with Kleinschmidt R2 consultants hired by the YMCA, to evaluate a “fish friendly” tide gate option. After thorough review, it was determined that the tide gate/culvert and weir option cannot be engineered to meet the requirements of the injunction or be eligible for an HPA permit.
With feedback from stakeholders and Tribal governments, DNR selected option 3, an open channel and bridge. This option meets the injunction requirements, has low maintenance costs, meets the standards for habitat restoration and fish passage permits and approvals, and constructs a bridge to retain direct access to Camp Colman across the spit (at an additional cost to the state of $1.96 million).
During low tides in Case Inlet, the water level in the cove would drop approximately 6 feet below the current water level. This would result in tidal exchange and water in the cove 70% to 75% of the time and water depth at the current elevation 30% of the time.

DNR is committed to continuing conversations about this project with Tribal governments, the YMCA of Greater Seattle and Whiteman Cove property owners as the proposal moves along.
The transition of Whiteman Cove to a naturally functioning estuary provides a unique opportunity for environmental education programs at Camp Colman  about the importance of estuaries to salmon and orcas.  DNR remains committed to providing its expertise to assist the YMCA to incorporate the recovery of this significant natural ecosystem into the camp’s outdoor programs. 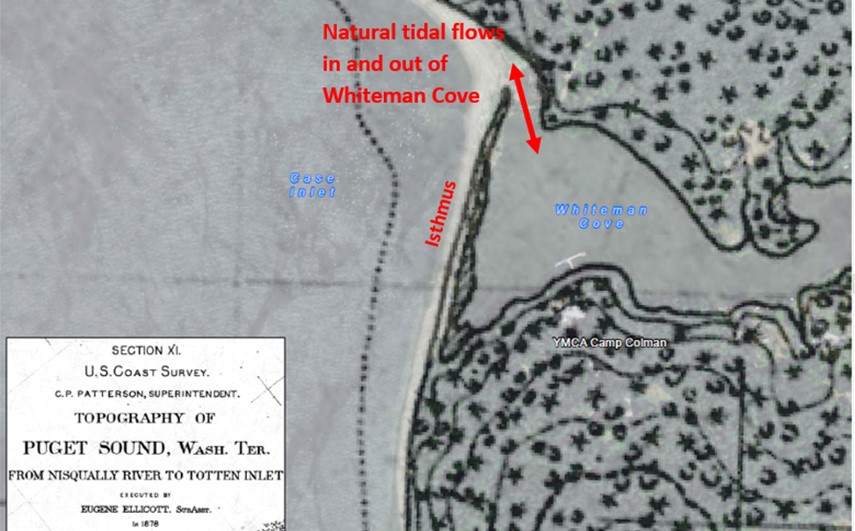 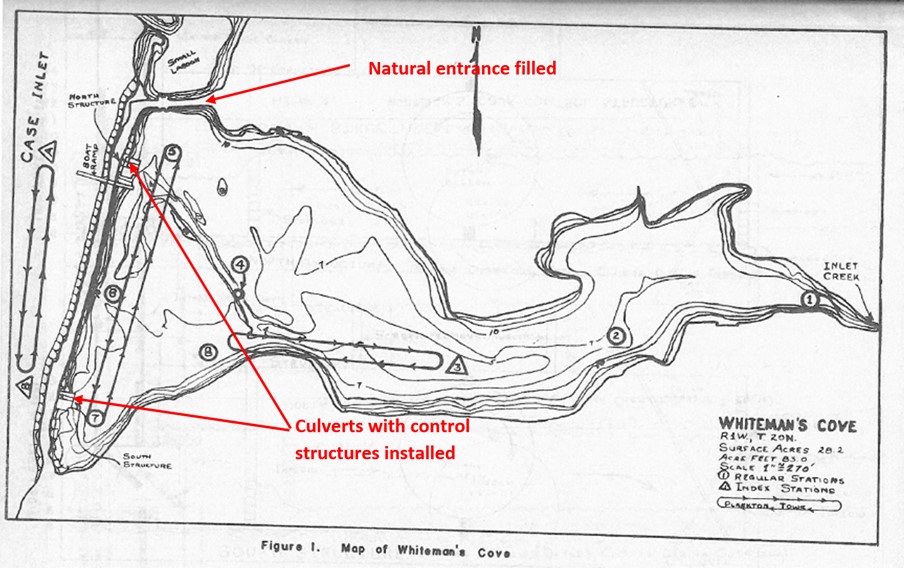 1878 map shows the natural condition of Whiteman Cove
In 1962, the Washington State Department of Fisheries converted the Whiteman Cove estuary into a saltwater "lake" for rearing young salmon.  The conversion included closing the natural tidal entrance to the estuary and installing two large culverts to control the flow of tidal water into and out of the "lake" to maintain water levels.  A roadway was constructed over the filled entrance and isthmus.  Sometime after 1970, the Department of Fisheries discontinued using Whiteman Cove as a salmon rearing facility.

We value your comments!

Please feel free to click on this link to leave us your thoughts and comments.