HomePrograms and ServicesGeologyPublications and Data

Chehalis River floodplain near the confluence of the Black River

In 2015, the Washington State Legislature mandated that the Department of Natural Resources, Washington Geological Survey collect, analyze, and publicly distribute detailed information about our state’s geology using the best available technology – lidar. The main focus of this new push for lidar collection is to map landslides, but there are innumerable additional benefits and applications of this data both inside and outside of the field of geology.

The Survey has set up a new lidar program and has begun collecting, inventorying, processing, and storing existing lidar data. New airborne lidar collection is underway, starting with areas at higher risk for landslides that do not already have high-quality lidar data.

The goal of the project is to gather high-quality lidar data for the whole state. Roughly 25 to 35% of the state has been flown, but the landscape changes over time, as does technology. Just as importantly, much of the state only has poor-quality lidar coverage that is of limited use to those relying on the information. These lidar collection flights were either scheduled during seasons where leaves are still on deciduous trees or with lower point-density specifications. Many areas that have already been collected will be scanned again at better resolution in order to be of use in landslide hazard assessments.

Use your mouse to hover over the photo to compare the detail in topography generated from 2-meter lidar versus a standard 10-meter DEM.

Lidar stands for LIght Detection And Ranging and the physics behind it are pretty simple. By pointing a laser at a surface at closely spaced intervals and measuring the time it takes for light to return to the source, very accurate three-dimensional information can be obtained with sufficient measurments. Billions of these measurements can yield an extremely detailed three-dimensional rendering of the terrain.

Informative video of how lidar works, by the National Ecological Observatory Network (NEON).

The instrument that collects the data is made up of a laser, scanner, and a GPS receiver. For ground scanning operations, the laser is typically a near-infrared laser. For water based surveys, a green wavelength laser is typically used. Green lasers are visible to the human eye and will penetrate shallow water, making them ideal for coastal surveys. Near-infrared lasers are invisible and harmless to the eye, but cannot penetrate below the surface of water. Unlike green lasers, water absorbs the energy from the near-infrared laser rather than reflecting it. 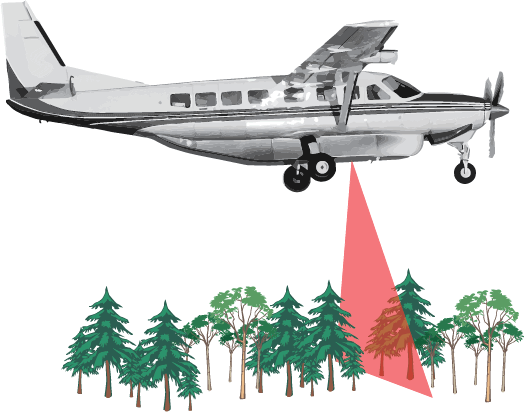 The instrument is mounted to a light aircraft, car, or static survey platform where an eye-safe laser measures objects with an accuracy of about 1 inch. Scanning over 100,000 points a second, the laser reflects off trees, buildings, streets, shrubs, people, and the ground. Flight paths are planned so that there is over 100% overlap of individual flight segments, such that a) every square meter of ground is covered twice and b) the number of points per square meter meets project specifications. A computer sorts the points and separates them for different uses, though it requires a specialist to process and interpret the lidar data.

The light is measured and calibrated using GPS, survey stations, and computer processing. Points representing the measurement locations are then created with a latitude, longitude, and height value. Millions to billions of points make up one dataset and are called point clouds. These points are sorted (classified) into different groupings according to what the laser hit. The main groups are first and last returns. First returns are the beams that reach the device first. This means they generally reflect the tops of vegetation, unless the ground is bare. The last return can be the ground surface, or it can return from low-lying vegetation. Dense forests, especially when leaves are on the trees, are difficult for the laser to fully penetrate. Using fancy computer algorithms, the returns are usually categorized into tree top, bare earth, buildings, vegetation, and water. 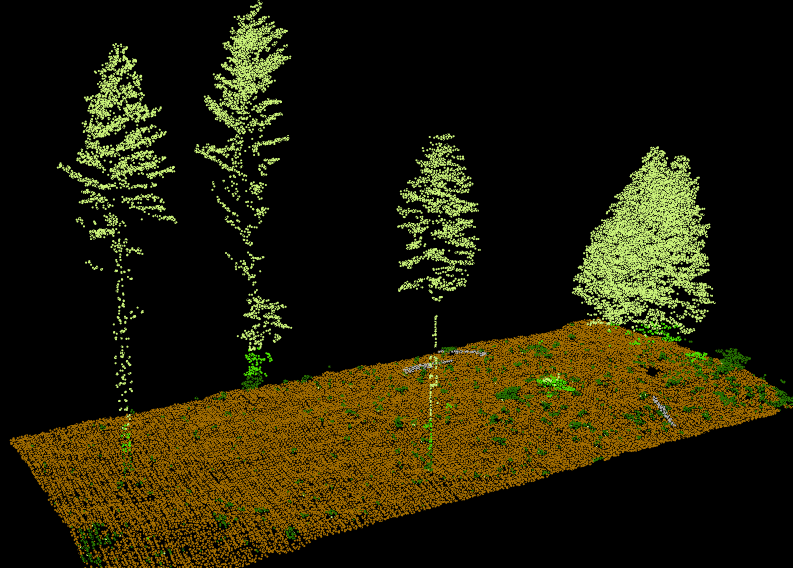 How is Lidar Used?

Lidar is widely used for many different applications. Some (but by no means all) of those uses are described below.

The plan represents a collaboration between the Department of Natural Resources (DNR) and the Office of the Chief Information Officer (OCIO). Contact Abby Gleason (DNR) or Joanne Markert (OCIO) for more details about the State Lidar Plan.

Planned lidar project areas by the Survey. Click on a button to see information about the projects.

The highest priority areas are where landslides are frequent and population density is high, or there is critical infrastructure.

How to Become a Partner

New lidar will be flown every year for the next three years. If your organization would like to partner with the Department of Natural Resources to fly lidar in areas not currently planned, please contact the Lidar Manager Abby Gleason for more details.

Aerial imagery of the west side of Van Zandt 'dike', along the Nooksack River in Whatcom County.

10m DEM hillshade of the same area. The subdued and coarse imagery does not show this area's story.

Lidar hillshade of the same area reveals a massive landslide with large runout that constricts flow of the Nooksack River to the west side of the valley.

Aerial image of a steep slope near the northern edge of Mount Rainier National Park.

Aerial image of a section of the Sauk River valley near Darrington.

Lidar-based relative elevation model image of the same area, which brings out former channel meanders within the floodplain.

Aerial image of the Carbon Glacier on Mount Rainier.

Colorized lidar hillshade shows detail of crevasses in the glacier.

Aerial imagery of Hood Canal and Case Inlet along the boundaries of Kitsap, Pierce, and Mason Counties.

Use your mouse to hover over the photo to see lidar reveal hidden and enigmatic "Manastash Mounds" near Yakima.

Explore and download our lidar data on our Lidar Portal 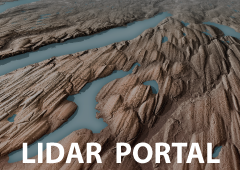 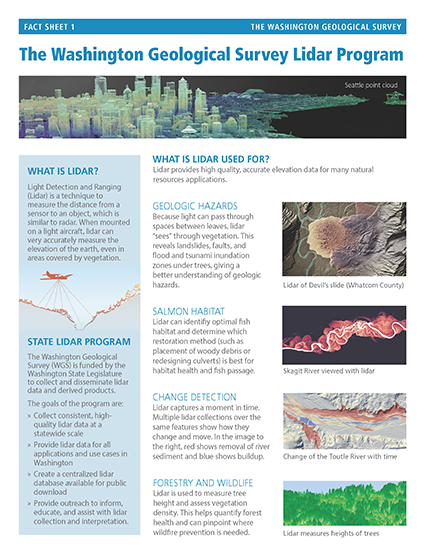