Glaciers form in areas where snow accumulation persists through time, allowing the snow to pile up and compact into ice. It typically takes hundreds of years for a glacier to fully form into a mass of ice. Glaciers behave like rivers of ice, moving, growing, and shrinking over time. They are bounded by the valleys that they reside in, but they flow under the force of gravity, and they also advance and retreat depending upon the climate conditions (how much snow accumulates versus melts in a given year).

Where can glaciers be found?

Certain types of glaciers, known as alpine glaciers, form at high elevations in mountains, places where temperatures are often persistently cold and where snow falls regularly. Alpine glaciers flow downhill. There are also very large glaciers that are known as ice sheets that extend over areas of at least 19,000 square miles. This is about the size of the state of West Virginia or Vancouver Island! Ice sheets are so large that they obscure the topography they lay on, and they flow outward from their center. Today, ice sheets can be found in Antarctica and Greenland, though in the past ice sheets were also present in North America, and they contributed to the creation of Washington State as we know it today.

Read the sections below to learn more about the different types of landforms that glaciers leave behind, the history of large ice sheets in Washington and the periodic floods associated with them, more about alpine glaciers, what that future of glaciers in Washington might look like, and more resources about glaciers.

Glaciers and ice sheets have tremendous power to drastically transform landscapes over relatively short periods of time. Most glacial landforms in Washington are the result of ice sheets.

Lidar enables us to see these landforms in fine detail. Click on the features on the map below to see what kinds of features the ice left behind. There are also many other glacial landforms, some of which are found in Washington. For more information about glacial landforms, check out this page from the National Park Service.

Anatomy of a glacier

Click on the feature labels to learn more about the parts of an alpine glacier. 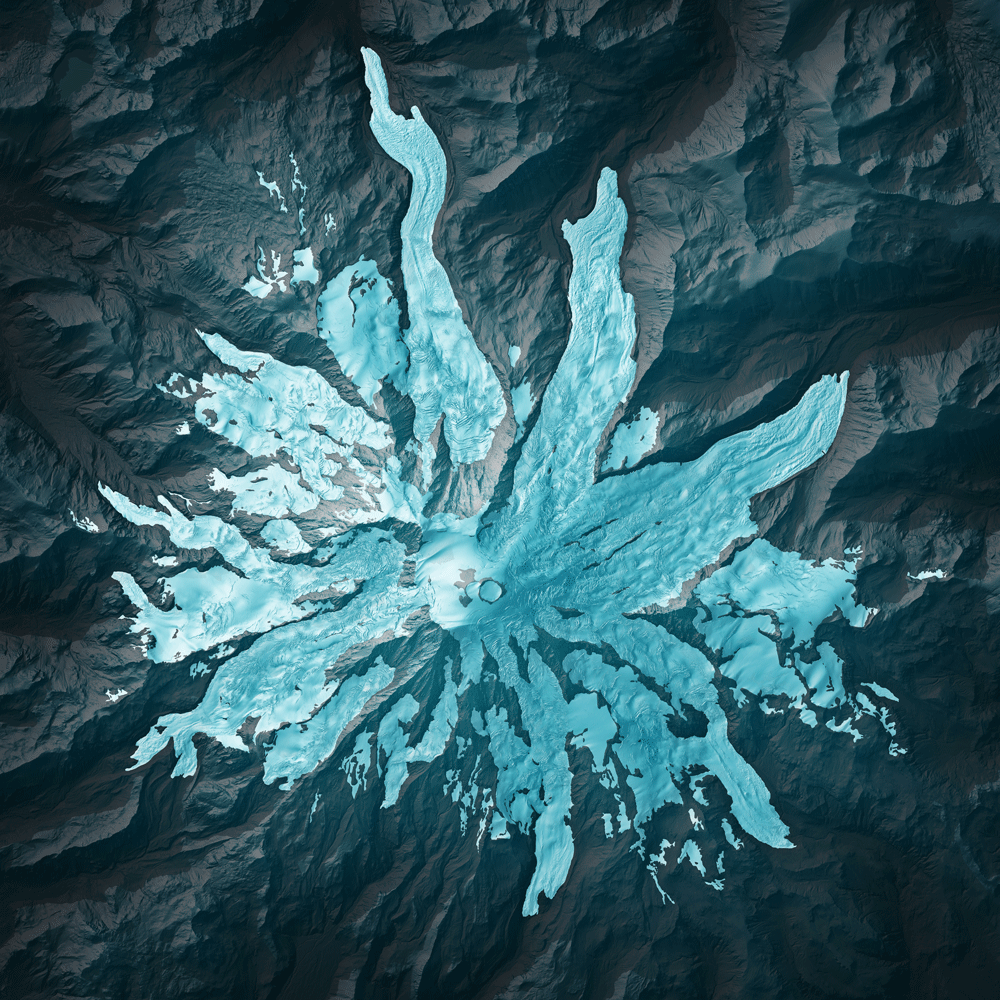 Other glaciated peaks include the volcanoes Glacier Peak, Mount Adams, and Mount St. Helens, but there are other tall peaks that host glaciers and are not volcanoes. For example, Mount Olympus, Mount Shuksan, Goat Rocks, and the Enchantments are glaciated. The map below shows the three main glaciated areas of Washington: the Olympics, the North Cascades, and the South Cascades. Click inside the rectangular inset areas in the map to open more detailed maps of the alpine glaciers. 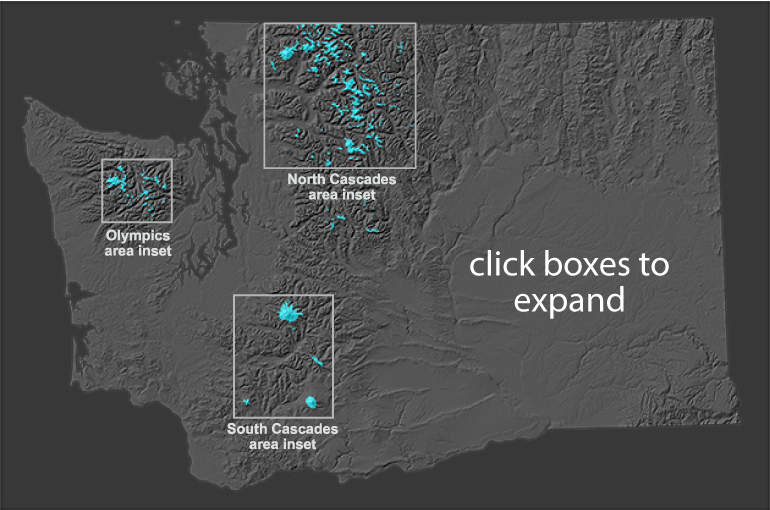 Although Washington currently has many glaciers, this may not always be the case. Most glaciers worldwide are melting, and have been for decades owing to long-term warming climate conditions caused by human activities. The rapid loss of these features can result in even further warming of our planet, since glaciers help cool our planet by reflecting sunlight. Glaciers are also a source of freshwater, and with further heating and drying conditions trending across the planet, water resources are getting slimmer. In addition, the melting of glaciers and ice sheets contributes more freshwater to our oceans, resulting in changes to thermohaline currents as well as rising sea levels. Sea level rise poses a threat to many low-lying coastal areas across the world, including in Washington. 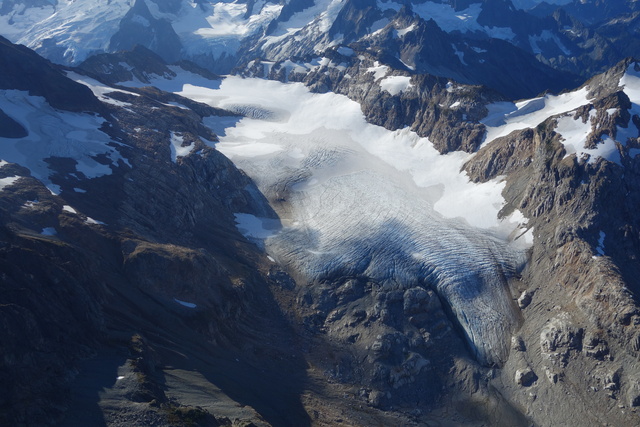 Image of the snow line at South Cascade Glacier. The snow line is the division between the gray shaded area on the glacier and the white area. Photo from: Bachmann, Matt, 2014. South Cascade Glacier: From the Glacier Photograph Collection. Boulder, Colorado USA: National Snow and Ice Data Center. Digital media. [https://nsidc.org/data/glacier_photo/search/image_info/southcascade2014101001].

The diagram below demonstrates how different glaciers would theoretically respond to warming conditions, and how this can be understood by looking at their ELAs. In part a, the glaciers are in balance with the climate and have ELAs denoted as ELA1. In part b, after climate warming begins, the ELAs for the glaciers move up from where they were before. In part c, the glaciers have adjusted to the climate in part b, and they have all lost mass. The small glacier has entirely melted here because the ELA migrated to a height above the glacier. 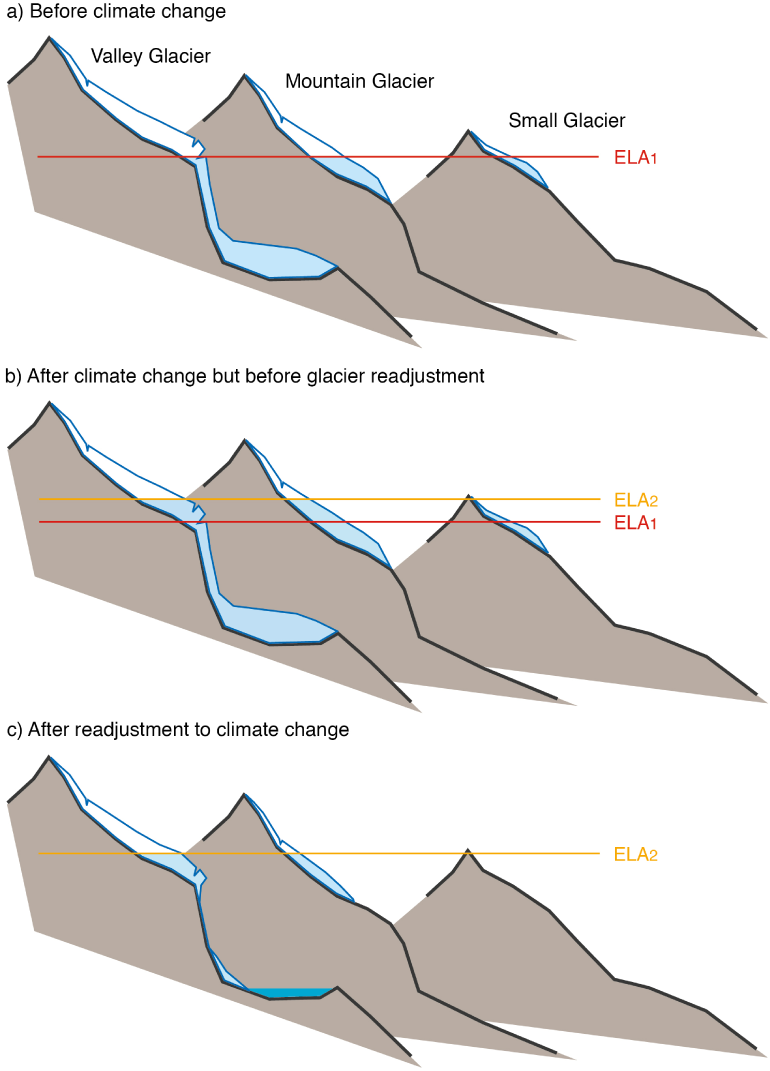 How do glaciers shape the landscape? from Oxford Education