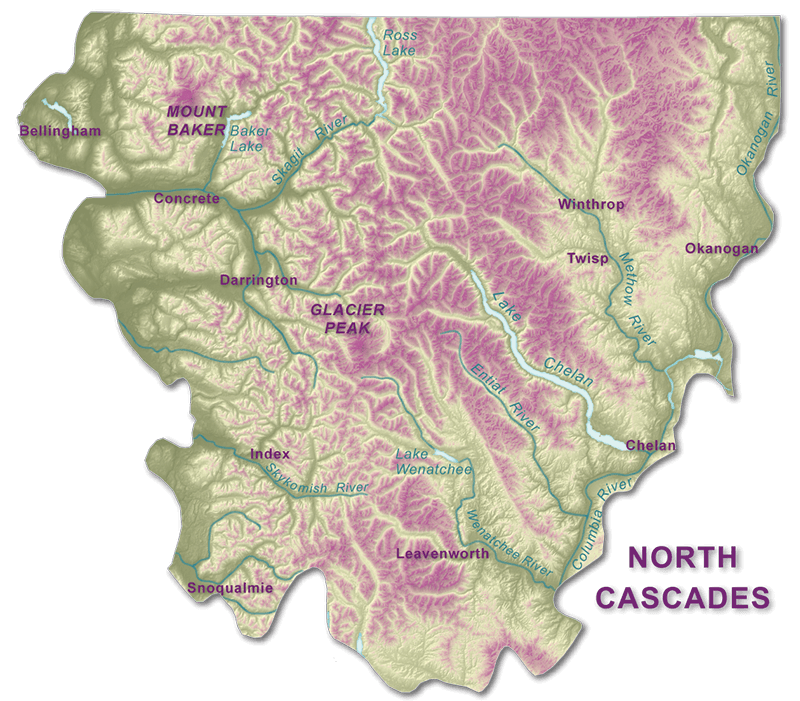 The Cascade Range is part of a vast mountain chain that spans for over 500 miles, from Mount Shasta, in northern California to British Columbia in the north.

The beautiful North Cascade Range, located in northwestern Washington State, has some of the most scenic, and geologically complex mountains in the United States. The sharp peaks, and rugged terrain of the northern portion of the range have an average elevation of 7,000 feet and are home to numerous alpine glaciers. The Range receives an average of 80 inches of rain annually, and as a result, it is densely vegetated.

The geologic history of the North Cascade Range is a complicated puzzle that records over 400 million years of various rocks and terranes that have been scraped off and smashed together, folded and buried, faulted and moved, finally making their way to their present day position in western Washington. After the chaotic assembly of the various terranes, a chain of volcanoes grew and erupted, covering the already complex geology with lava and ash. Volcanism continues to this day. Mount Baker and Glacier Peak are the two youngest volcanoes in the Range—they stand out above the rest, reaching to over 10,000 feet. 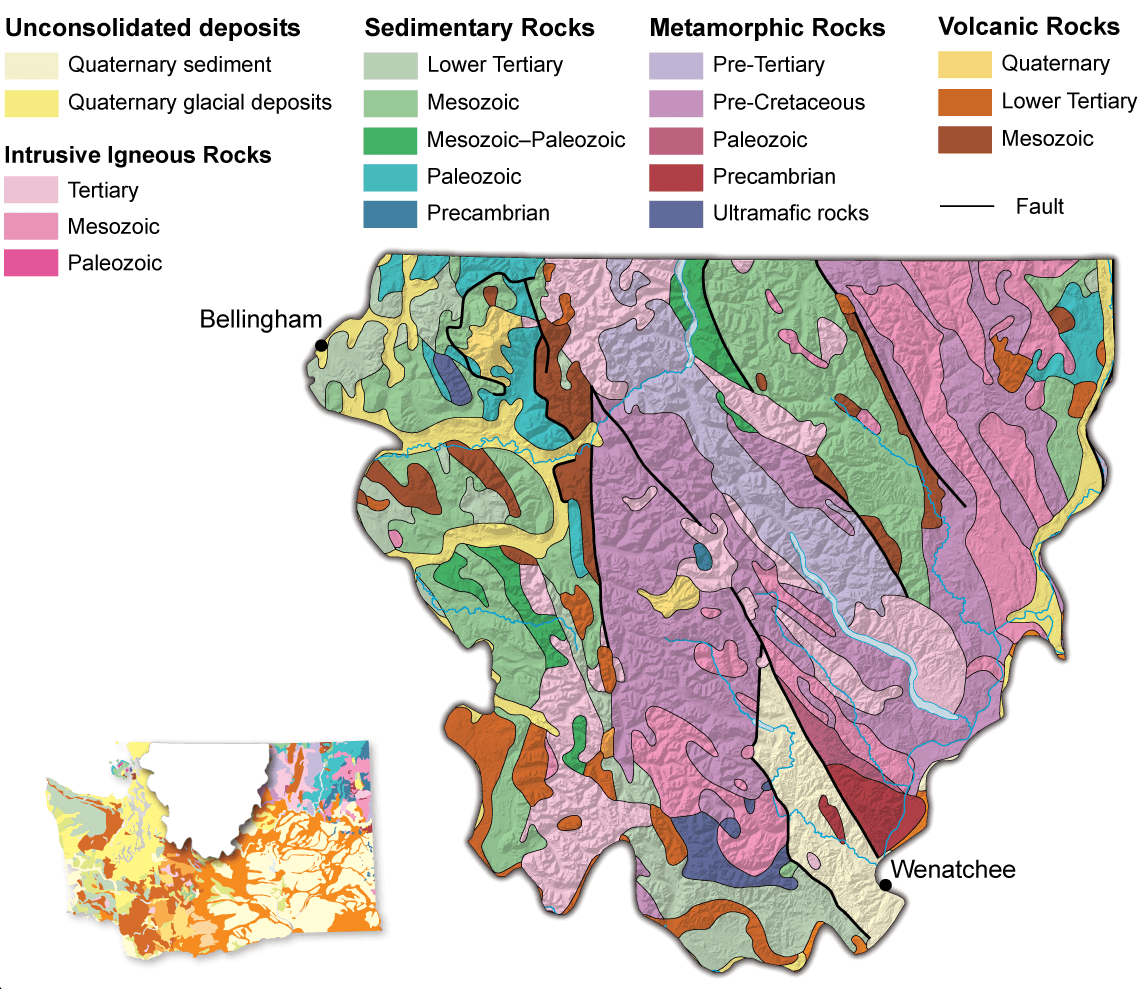 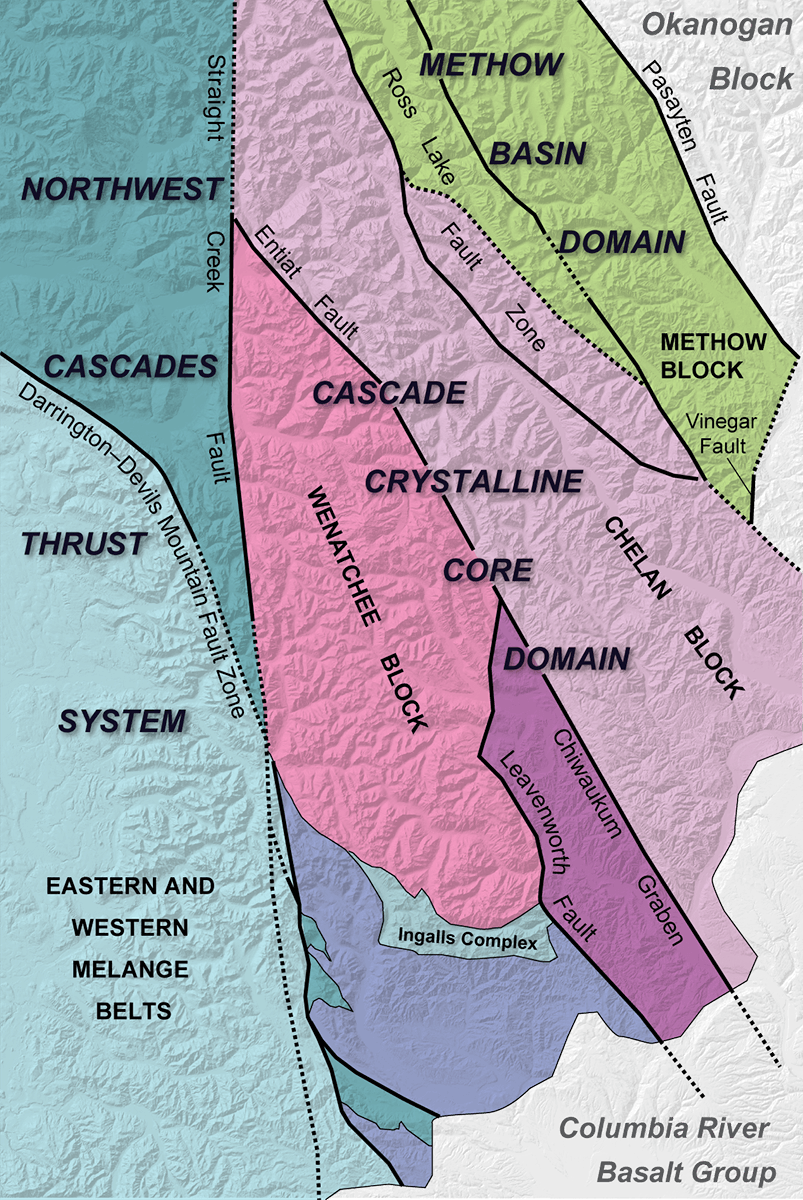 The rocks we see today in the North Cascades are the result of a complicated geologic history. Prolonged subduction along the western margin of North America has resulted in the docking (accretion) of many exotic blocks of land (terranes). The older bedrock of the North Cascades can be generally divided into three main parts, or “domains”. From west to east these are: the Northwest Cascades Thrust System, Cascade Crystalline Core, and Methow Basin domains. Each domain in turn contains numerous accreted terranes. Contacts between the different terranes are usually large-scale faults and are frequently zones where igneous plutons intruded during accretion.

Domains, structural blocks, and major fault zones within the North Cascade Range. Modified from Haugerud and Tabor (2009). Click the images to expand them.

The Cascade Arc has been erupting a chain of volcanoes over the last 40 million years along the crest of the modern day Cascade Range. During this time the Cascade Arc erupted to cover the older metamorphic, mélange, and sedimentary rocks with lava and ash. The South Cascades record this older period of volcanic eruption, as most of the rocks exposed there are from this time; the extensive Ohanapecosh Formation is a good example of this. The volcanoes that erupted in the North Cascades during this time period have been eroded away because the North Cascades are being uplifted at a greater rate than the south Cascades. However, the plutonic roots of these ancient volcanoes remain, and they outcrop as numerous large batholiths such as the Chilliwack batholith, the Snoqualmie batholith, and the Cloudy Pass pluton.

Cascade volcanism began within the last 5 to 7 million years, and the modern-day volcanic arc is still active, extending from Mount Garibaldi in British Columbia in the north to as far south as Mount Lassen in California. Two volcanoes lie within the North Cascades: Mount Baker and Glacier Peak.

Three main faults divide the domains, as well as a number of smaller faults that locally offset the different terranes: the Straight Creek fault, the Ross Lake fault zone, and the Pasayten fault. These faults have been slicing and shifting the various terranes northward over the past 100 million years.

Terrane accretion was followed by an episode of extension and massive erosion and deposition (~45 to 50 million years ago). Rivers and streams washed over the older metamorphosed rocks and plutons, and then deposited sediment in extensional basins formed from the stretching and pulling of the crust. The extension made room for granitic magma to intrude along faults.

About 25,000 to 13,000 years ago, during the last ice age, much of the North Cascade Range was covered by glaciers. Some alpine glaciers originated on the peaks of the tallest mountains and remain there today. During this time, the Cordilleran ice sheet was advancing south from British Columbia and most of the range was covered by a thick sheet of ice—only the tallest peaks rose above the ice. As the ice sheet retreated, massive amounts of water ran off the glacier, eroding the mountains, carving U-shaped valleys, creating lakes, and depositing massive amounts of glacial sediment. 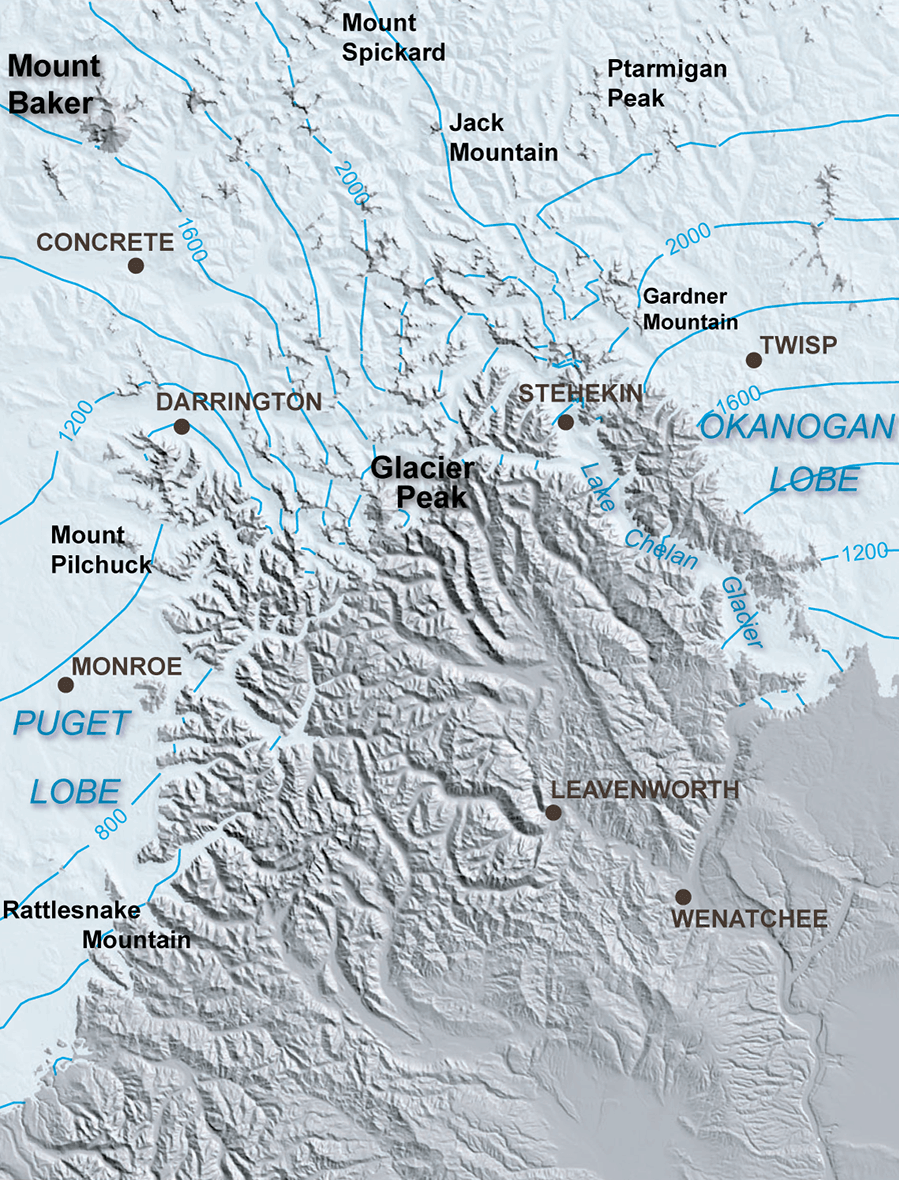 Thickness and extent of glacial ice in the North Cascade Range during the last ice age. Modified from Haugerud and Tabor (2009)

The northeastern Cascade Range is known for mineral deposits of various geologic ages. Former mining camps and prospects are scattered throughout the northwestern Cascades, and primarily recovered copper, silver, and gold.

Faults associated with shallow intrusions contain copper, molybdenum, and tungsten, and are great places to find quartz and pyrite crystals. The Spruce Ridge Claim in the Snoqualmie batholith in King County is a world-class mineral locality. This batholith also contains a large porphyry-copper deposit. The state's largest copper producer, the Holden Mine in Chelan County, produced 207 million pounds of copper along with zinc, silver, and gold from 1938 to 1957. The largest copper deposit in the state is at Miners Ridge in Snohomish County. There, drilling in the Cloudy Pass pluton has outlined a porphyry copper resource of 1.9 billion tons. However, this deposit will not be developed because it is within the protected Glacier Peak Wilderness Area.

The Cannon Mine in Wenatchee closed in 1994, but at one point was the second largest underground gold mine in the country, producing over 1.4 million ounces of gold and 2 million ounces of silver. The mine was developed in an epithermal deposit, which formed in the Earth's crust as volcanic rocks were intruded.

The spectacular Twin Sisters are made up of dunite, an ultramafic rock that contains the largest olivine reserves in the United States.