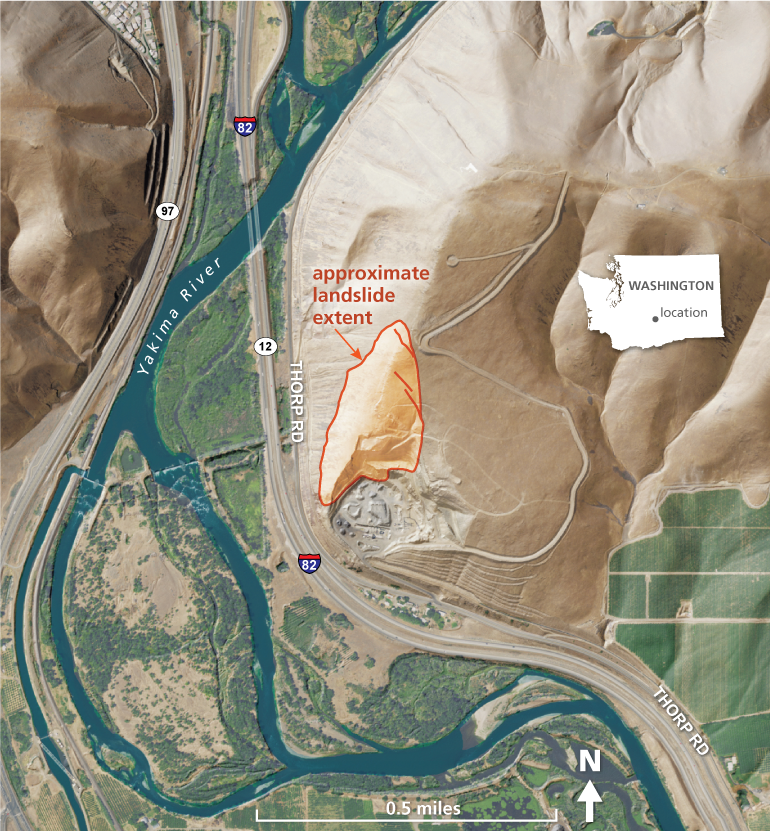 Approximately 20 acres in the Rattlesnake Hills, three miles south of Yakima, near Union Gap, WA, is currently moving at a rate of about 0.7 feet per week in a southward direction. At the end of May 2018, the landslide was estimated to be moving at about 1.5 feet per week. The maximum recorded rate of 1.6 feet per week was measured between January 2018 and April 2018. The movement at Rattlesnake Hills is a translational landslide, composed of blocks of basalt sliding on a weaker sedimentary layer. The geologists and engineers monitoring the situation suggest that the landslide will probably continue to move south, with material accumulating in the nearby quarry. In this scenario, rockfall is expected within the quarry and will accumulate along the toe of the landslide, potentially slowing and eventually halting landslide movement. Additional rockfall to the west and south may impact Thorp Rd., which has been closed by Yakima County since late December 2017 as a precaution. There are other very low-probability scenarios where the landslide could mobilize quickly and reach I-82, impacting homes south of the quarry or potentially reaching the Yakima River. These less likely scenarios will probably be registered ahead of time by instruments, providing valuable information for emergency managers. Precautions and plans are in place to take action if monitoring data suggests this may happen.

What Do We Know?

Where is the landslide?

It is in the Rattlesnake Hills, three miles south of Yakima, WA. The area of concern is located above and north of a quarry managed by Columbia Asphalt. The quarry is bounded by Thorp Rd. to the south and west.

Has the landslide already happened?

The landslide is currently moving south toward the quarry. There are large cracks in the ground above the quarry that were first noticed in early October 2017, suggesting potential for a landslide. Mining operations have stopped and monitoring instruments have been installed.

What is the geology there?

The landslide consists of Columbia River Basalt flows sliding over a weaker sedimentary interbed on a limb of the Rattlesnake Hills anticline (fold). The interbed is dipping (sloping) toward the quarry at about 15 degrees. Water does not appear to be a factor in this landslide.

What is the rate of movement? 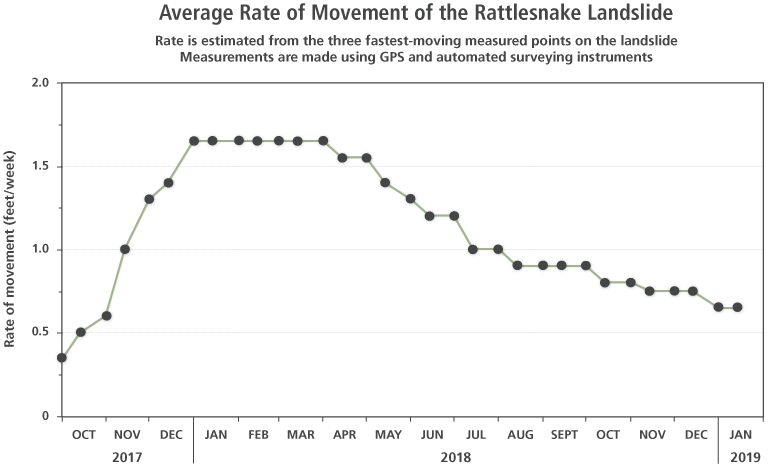 Significant surface cracks are visible across the body of the landslide and represent the slow movement downslope. Cracks have been widening and new cracks have developed since October 2017.

It is estimated that the landslide volume is ~4 million cubic yards and covers an area of about 20 acres. 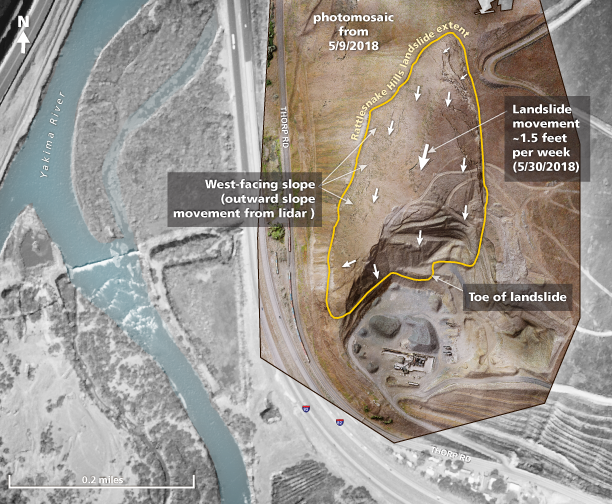 What Do We Think Will Happen and When?

Based on the rate and behavior of the landslide, it is uncertain when the landslide will stop moving. It is very unlikely that a “large event” such as sudden and rapid movement will occur. Instead, the debris will continue to accumulate in the quarry to the south, eventually halting movement of the landslide.

What Are We Doing About It?

Large shipping containers (Conex boxes) filled with concrete blocks have been placed on the southwest corner of the landslide mass along Thorp Rd. to block rockfall from reaching I-82. Yakima County has closed Thorp Rd.

A Level-3 evacuation was issued for residents south of the landslide. Yakima County lifted the evacuation and some residents have returned.

Preparing for the worst

Local, state, and federal agencies, the Yakama Nation, and mine operators are working together to monitor the landslide and adjust plans as more information is gathered. Detour routes have been planned for I-82, and the interstate will be closed if the landslide accelerates. Plans have been implemented for possible scenarios where the landslide could impact or dam the river to the south or west. 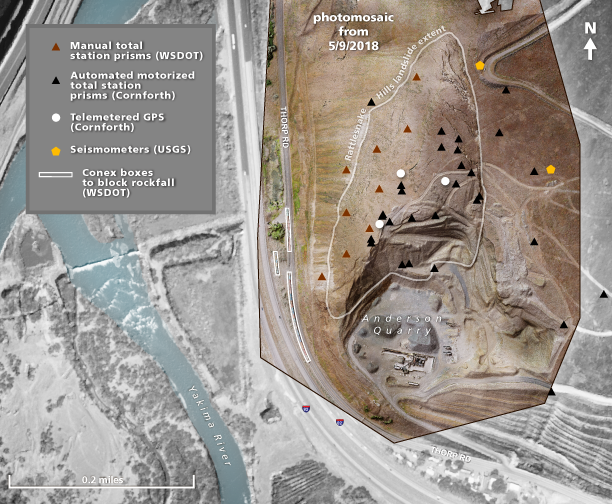 Who Is Involved in Monitoring the Situation?