ATTENTION, BENEFICIARIES: Despite the ongoing COVID-19 outbreak and the closure of our offices to the public, the vast majority of DNR's business operations are continuing, including timber harvests and agricultural leasing. With much of the agency's staff working remotely, we ask for your patience as we attempt to maintain normal operations. As always, if you have beneficiary-related questions, please contact Lisa Anderson at lisa.anderson@dnr.wa.gov.
DID YOU KNOW? Board of Natural Resources meetings are being conducted in a webinar format to address the need for social distancing. These meetings take place on the first Tuesday of each month, except August. If you are interested in participating you can access instructions for joining the meeting at this link.
View a list of additional operational changes related to COVID-19.

What are state trust lands?

Who are the beneficiaries?

DNR manages several trusts with different beneficiaries.  The chart below illustrates the proportional acreage of the major trusts, followed by a description of the beneficiaries for each. 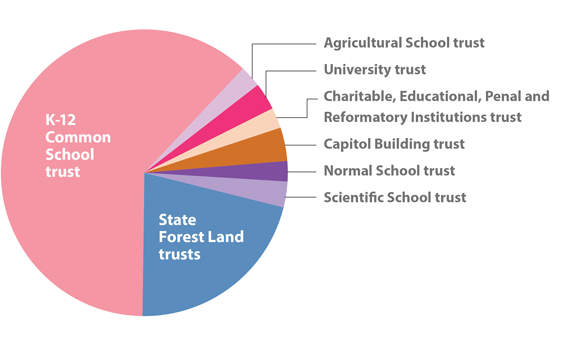