Cattle Point is characterized by low rolling hills with the highest point on Mount Finlayson at 295 feet. The peninsula at Cattle Point, which runs east to west, consists of prairie grassland on the south and mixed coniferous and deciduous forest located to the north of the Mount Finlayson ridge. The point is bounded on the south by the ocean waters of the Strait of Juan de Fuca, which separates San Juan Island from the Olympic Peninsula. The southern shoreline consists of long gravel beaches broken by rock outcroppings and protected sandy coves. The northern shoreline of Cattle Point is located on Griffin Bay. This area consists of long gravel beaches as well as three temperate marine lagoons. 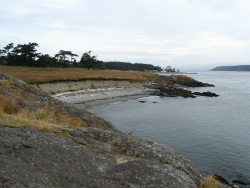 The geology of the San Juan Islands and Puget Sound has been heavily influenced by glacial processes and plate tectonics. In recent ice ages, the area was covered with ice over one mile in depth. As the glaciers retreated, large quantities of glacial sediments were deposited while the land also rose in the glacial rebound process. At certain times during glacial retreat (theorized to be when glacial rebound matched sea level change), wave-cut benches were created on the slopes of Mount Finlayson. These benches remain visible in the form of two to three slope breaks between the ridgeline and the coastal bluff. The open grassland and intact natural topography make the area a prime example of the benches resulting from this process.
San Juan Island is located in close proximity to the convergence zone of two major tectonic plates, the Juan de Fuca Plate and the North American Plate. Deep-seated, major tectonic events of magnitude 7 or greater are possible along tectonic plate boundaries, and evidence from studies in Japan and on the coasts of Oregon and Washington indicates that a seismic event of this magnitude may have occurred off the Oregon-Washington coast as recently as 300-years ago. Seismic activity also occurs on shallower, near-surface faults in northwestern Washington; however, no active faults are known to be located in the greater project area and no historical earthquakes are known to have occurred in the area of Cattle Point.
Cattle Point is characterized by substantial depths of glacially deposited sand and gravel overlying bedrock. Glacial soils associated with the prairie and slopes of Mt. Finlayson are gravelly to cobbly with occasional boulders and are somewhat excessively drained. Depending on slope, runoff can be low to very low. An outcrop of bedrock is visible from the beach along the shoreline in the eastern portion of Cattle Point NRCA, consisting of a variety of metamorphosed sedimentary and volcanic rocks.

Cattle Point NRCA contains over 150 species of native plants found in several different types of plant communities across the site. The following information is based on inventories by the San Juan County Land Bank and Washington State Natural Heritage Program Ecologists.
Grasslands and Dunes: Grasslands occur over most of the southern portion of the NRCA on drier slopes where soils are sandy and there is the most exposure to winds.  Most of the grasslands are dominated by non-native species; however some areas support patches of native red fescue habitat. These native grassland habitats include a number of native plant species, such as field chickweed, western buttercup, chocolate lily, camas, hyacinth brodiaea, and prairie lupine. Intermingled with these native grassland patches are dune habitats that support species adapted to this sandy environment such as seashore lupine, yellow sand verbena, and Japanese beach pea.
Coniferous Forest: The other major plant community type on the NRCA consists of Douglas-fir dominated forest approximately 130 years old.  In addition to Douglas-fir, grand fir, western hemlock, and western redcedar are also commonly found.  Hardwood species including red alder and Pacific madrone are also scattered within the forest, with madrones concentrated near the water’s edge. Understory and groundcover species reflect the variety of moisture and shading conditions across the site.  In the more mesic (moist) areas, tall shrubs such as Douglas maple, oceanspray, and baldhip rose are scattered under the trees and the forest floor is dominated by swordfern and foamflower. In contrast, drier areas support species such as baldhip rose, oceanspray, and grasses. On sites of intermediate moisture or exposure, the understory changes to dominance by low Oregongrape, brackenfern, swordfern, and white-flowered hawkweed.
Tidal Wetland:  Jointly owned with the San Juan County Land Bank, the tidal wetland known as Third Lagoon contains a mixture of salt-marsh and shoreline vegetation, including species such as pickleweed, saltgrass, Virginia peppergrass, and American sea rocket.  The lagoon is formed by a wide gravel berm that separates it from Griffin Bay, with only a narrow channel allowing for the interchange of salt water at high tide.  Because of this, the lagoon experiences relatively wide fluctuations in temperature and salinity, creating habitat that supports a diverse fauna of fish and marine invertebrates as well as specialized salt marsh and tidal flat vegetation.  The lagoon attracts a variety of wildlife incliuding otter, mink, bald eagle, ospray, and numerous waterfowl and shorebirds.
Freshwater Wetland:  Portions of an isolated freshwater wetland are found within the NRCA.  This wetland lies in a depression that collects groundwater and runoff from the eastern slopes of Mt. Finlayson, and appears to have no inlet or outlet.  Vegetation varies across the wetland and includes Sitka spruce, black cottonwood, western redcedar, willow, Pacific crabapple, Douglas’s spirea, slough sedge, soft rush, and skunkcabbage.

Cattle Point NRCA hosts many wildlife species of conservation interest. More than 40 butterfly species have been documented in San Juan County and many can be found at Cattle Point NRCA, including satyr anglewing, ochre ringlet, woodland skipper, Milbert’s tortoiseshell, and spring azures, among others.
Over 160 bird species can be found on the NRCA during all or part of the year, including a variety of waterfowl, shorebirds, raptors and falcons, woodpeckers, and songbirds.  Harlequin ducks breed at Third Lagoon. Peregrine falcons find ideal breeding habitat on the tall, vertical cliffs along the southern edge of the NRCA, which have ledges and limited accessibility for potential predators. Bald eagles nest in the vicinity and are frequently sighted overhead. Other bird species of conservation concern at the site include the pileated woodpecker and the olive-sided flycatcher.

Public and private universities, other research institutions or individual researchers may contact DNR to propose a research project at Cattle Point NRCA. If you are interested in pursuing a research project, please contact David Wilderman, Natural Areas Program statewide ecologist, at david.wilderman@dnr.wa.gov.

Public access includes several parking spaces at the interpretive center, which includes a public restroom, beach access, and short trail along the bluff above San Juan Channel with panoramic views to the east.
The larger parcel in the NRCA includes about 1.3 miles of trail that connects in three locations to the Cattle Point Road, with trail connections to Third Lagoon, Mt Finlayson, and San Juan Island National Historical Park to the west.  There is also a trail from Cattle Point Road to the Coast Guard lighthouse on Bureau of Land Management property south of the interpretive center.  You can download a map of Cattle Point NRCA.
Trail signage was updated in 2011. Interpretive and environmental education information in the interpretive center will be expanded or enhanced as funding becomes available.
Cattle Point is impressive any time of year, but is especially pleasant late spring into autumn, when temperatures and wind are moderate. For information on classroom visits and other educational opportunities, please contact the DNR Northwest Region natural areas manager.
You can download a map of Cattle Point NRCA.

Volunteers and site stewards help with a variety of activities on natural areas, including invasive species control, restoration, and monitoring. If you are interested in participating as a volunteer or site steward, please contact the DNR Northwest Region natural areas manager. 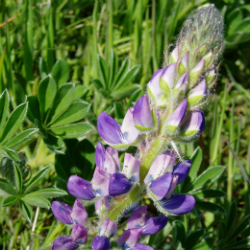 The Department of Natural Resources is managing parts of the NRCA to enhance the condition of grassland habitats and to improve habitat for grassland-associated species, particularly butterflies.