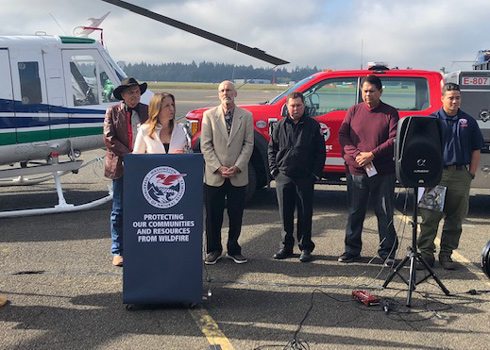 Commissioner of Public Lands Hilary Franz today unveiled a request to double the state’s wildfire fighting budget. The $55 million wildfire spending plan will improve wildfire response and create healthier forests.
No Washingtonian was spared from the impacts of wildfire this year. Hot, dry conditions – coupled with diseased and dying forests – resulted in more wildfires and more catastrophic wildfires.
DNR has responded to 1,700 wildfires so far, setting up 2018 to have the second most fires on record.
And a greater portion of fires are occurring in western Washington. Nearly 39 percent of wildfires were west of the mountains this year, a record high.
This summer, wildfires threatened Washington communities and blackened the state’s skies with smoke. At times in August, Washington’s air quality was the worst in the world.
As head of the state’s largest wildfire fighting force – the Department of Natural Resources – Commissioner Franz knows that unless we increase investments in wildfire preparedness and forest health restoration, wildfires will continue to intensify.
“It is time for bold, forward-thinking investments to reduce wildfires. Inaction is not an option,” said Commissioner Franz. “Wildfire is not an eastside or westside issue, it is a Washington State issue. It’s time to invest in strategies that keep wildfires small and give back summers to every Washington resident.”
“I look forward to working with the governor and legislature to ensure our firefighters have the resources they need to keep communities safe and restore the health of our forests.”
Though DNR firefighting resources were spread thin, DNR and partner agencies kept 94 percent of this year’s fires to less than 10 acres in size. Yet, nearly 350,000 acres still burned statewide.
Largest Wildfire Funding Package in State History
Commissioner Franz submitted the $55 million wildfire and forest health package ($38 million operating, $17 million capital) to the legislature in advance of its 2019-21 budget season.
The proposal addresses the need for quicker, more robust response capacity by:
It invests in prevention by:
And it creates healthy forests, which reduce destructive wildfires, by:
Joining the Commissioner at a press conference to announce the package were key stakeholders in Washington’s wildland fire community.
“For too long, we have been penny wise, pound foolish, paying huge costs to suppress megafires instead of investing in wildfire reduction strategies,”
said, Representative Larry Springer (D-Kirkland, member of the legislature’s Wildfire Caucus). “As a member of the Wildfire Caucus, this investment in preparedness and forest health is a top priority.”
“The communities I represent are on the frontlines of our wildfire and forest health crisis,” said Representative Tom Dent (R-Moses Lake, founder and chair of the state legislature’s Wildfire Caucus). “It is critical that our firefighters and foresters have the tools they need to reduce large, destructive wildfires in the future.”
“Wildfire doesn’t respect property boundaries,” said Rodney Cawston, Chairman, Confederated Tribes of the Colville Reservation. “By increasing resources for our state’s wildland firefighters, we decrease the risk that wildfires pose to tribal communities and private property owners. This is a win-win for Washington.”
“As a fire chief and incident management team member in a community impacted by wildfire, I know we need more resources on the ground,” said Jack Cates, Fire Chief, Spokane County Fire District #9. “With more full-time firefighters and air resources, the Department of Natural Resources will be better able to assist us in protecting endangered communities like Spokane County.”
“I love serving my community as a wildland firefighter,” said Tommy Matsuda, seasonal firefighter, Department of Natural Resources. “But the part-time nature of the job makes it hard to sign-up year after year. I would gladly stay on full-time performing forest health work in the off-season if I was able.”
“As mayor of a town that deals with wildfires each year, I strongly support putting more resources towards wildfire preparedness and forest health,” said Soo Ing-Moody, Mayor, Twisp. “By building natural wildfire resilience and increasing wildfire response capacity, we ensure communities like Twisp will be protected now and in the future.”
###
MEDIA CONTACT
Carlo Davis
Communications Directo